The Muracle of Art 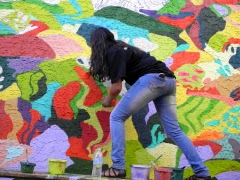 In a continuing endeavor to beautify the local area while paying homage to members of it’s creative community, Project Street Art II held a live painting event at 10 locations in the Stroudsburg, PA and East Stroudsburg, PA area on Saturday September 27th. The unseasonably warm autumn day encouraged those who love the arts to journey among the various locations while marveling at the formation of the images created to adorn the selected sites. The act of experiencing the process of creating murals on the exterior walls of the 10 designated locations throughout the area proved to be a deeply profound one as the intricacies inherent in the varying approaches each artist employed as they gave their visions form were revealed throughout the day. This experience was further enhanced by the musicians who performed at each site which added a joy to the thoughtful reflections on the work many who attended the event shared in their verbal and non verbal conversations.

Project Street Art II is the second of endeavors designed to enhance the aesthetic qualities of the region. The first was known as Project Street Art I which took place on Saturday May 24th, 2014. This event consisted of painting murals on a large paneled wall running along the 600 block of the Main Street section in Stroudsburg, PA which is the site of a devastating fire that occurred in 2006. Project Street Art was initiated by members of Stroudsburg’s creative community who are led by Shane Izykowski. Their next endeavor is yet to be announced but an after party of which the public is invited to is scheduled to take place on Friday October 3rd beginning at 6pm at The SOHO in the Burg in Stroudsburg, PA www.facebook.com/sohointheburg. The party will serve as an opportunity to meet the artists who participated in the endeavor as well as their supporters. To learn more about Project Street Art along with how you can participate and support their future endeavors, please explore their Facebook Page at www.facebook.com/projectstreetart?ref=br_tf.

Although the Project Street Art mural painting event dominated the day, another event occurred that was indicative of the creative energies that has blessed the town in recent years. This event was the ALIVE Concert and Open Jam which was held on the front lawn of Moe'st Everything Muse which is located on Ann Street in Stroudsburg, PA near the Ribbon Factory Outlet. I visited the event while roaming around the town partaking of the day’s primary endeavor and was fortunate enough to hear a band known as Jettison who sang a number of established songs leading many who listened to sing joyfully along. Other bands scheduled to play were Aragon, H 2 O, Sheep in Wolf’s Clothes, Blind Men Driving, and more. However, I could not stay to listen as the echoes of Project Street Art summoned me away.

Moe'st Everything Muse holds an Open Jam Nite the last Saturday of every month with the next event scheduled to place on Saturday October 26th beginning at 8pm. All are welcomed to come and share their musical talents or to partake of the event as a member of the audience. In addition to the Open Jam Nites, Moe'st Everything Muse offers a variety of musical instruments to be purchased or traded. They also buy musical instruments from those who wish to sell them along with lessons, a rehearsal space, and repairs to broken instruments. Moe'st Everything Muse recently opened their new creative musings and gift shop which includes an eclectic selection of T - Shirts, Jewelry, Books, and Art created by local artists. You’ll be able to learn more about Moe'st Everything Muse and every thing they offer by exploring their Facebook Page at www.facebook.com/moesteverything?ref=ts&fref=ts.

The day proved to be a wonderful one filled with art, music, and good conversation. Several of the murals were left unfinished at the end of the day due to the extensiveness of the work involved in creating them. However, they are scheduled to be completed by the artist and their assistants within a few weeks. In the meantime, all of the murals are available to be viewed by the public as they walk around the towns of Stroudsburg and East Stroudsburg, PA. You’ll find more photographs taken during the Project Street Art mural painting event and the Moe'st Everything Muse ALIVE Concert and Open Jam in the Special Events 2014 Gallery at www.facebook.com/media/set/?set=a.10152230295395421.1073741876.636000420&type=1.
Posted by Unknown at 3:24 PM