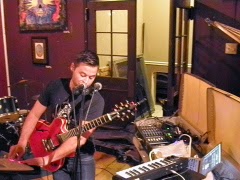 Due to many circumstances, it’s been several months since I’ve been to The Sherman Theater’s Living Room Stroudsburg, PA to partake of their weekly Open Mic Nite event. But, on Sunday September 28th, I happened upon the opportunity to venture into the venue as the technicians were in the process of preparing for the evening’s event. I stepped outside in order chat with those who were sharing their anticipatory conversations about the potentials the evening held while enjoying the pleasant effects of the sun filled day. It was during this time it was announced the sign in list was available so those who wished to share their talents could place their signatures or nom de plumes upon it.

As the 7pm hour approached, the evening’s co host, Andrew Paul (aka A. P.) took the stage to share his welcoming sentiments before sharing a poem he wrote while he was angry. His words struck a familiar chord in many who heard them. A. P. then introduced the first listed performer of the evening who was a poet known as The Carlton. His well established presence in the area and reputed mastery of the spoken word took the attentive audience upon journeys that awaken their minds to the essential truths the poet conveyed. The Carlton was followed by Newcomers Misty and Mike of A. N. D. whose love filled words filled the room with their sympathetic nuances while those who not only heard their voices but felt them silently embraced their every utterances.

Misty and Mike were followed by co host Andrew Oldfield who shared some thought provoking words with the gathering. The conclusion of his words introduced another Newcomer to the event named Richie who lent his voice to several established songs that delighted the audience and gained their support through the technical difficulties that ensued. Richie was followed by the duo known as Woodrow www.facebook.com/wearewoodrow who consists of Brian Brancamp and Theresa Rattcliff. Their presence was a pleasant surprise to those who knew of the musically exhausting day they spent performing at various locations during the Project Street Art event the previous day.

They began their set with a spell binding rendition of the Police’s “Everything She Does Is Magic” and continued to woo the audience through the soulful interpretations of the songs they continued to share. They were followed by Jessie Roth (aka J. R.) who shared some information about a project The Sherman Theater is embarking on titled, “Community at The Sherman Theater” designed to enhance the betterment of the area and its population. It was with Ms. Roth’s final words did the evening’s feature performer take the stage.

The Saturday Giant (aka Phillip Cogley) took to the stage with his guitar, a keyboard, and a number of foot operated apparatuses from which he immediately began to mesmerize the audience with the echoing sounds of the music he extracted from the electronic denizens at his disposal as well as through his voice. The transfixing qualities of the performance led the audience upon journeys which led them from one isotropic horizon to another. The multi layered musicality of his performance spoke to dreams that has yet to be dreamt and allowed visions to be seen that remain invisible to those who have not heard him perform. Those who were fortunate to be present enough to experience the moments The Saturday Giant created are destined to relive their mind expanding qualities throughout all of their yet to be manifested life filled moments.

The Saturday Giant (aka Phillip Cogley) lives in Columbus, OH and enjoys traveling around the country performing Art Rock to those who come to hear him play. Each performance he presents is unique as he insist on rendering all the components of his songs with the potentials found in the state of spontaneity intact. He feels that “a show should be about what happens that day, in that room, between that audience and that performer. It shouldn't be a carbon copy of the same performance from the night before.”

According to his bio, Mr. Cogley also yearns for “the freedom to make mistakes…. As soon as art becomes perfect, it dies.” The flow that exuded among those who listened to The Saturday Giant during the September 28th Open Mic Nite made it difficult if not impossible to determine if there were any of the mistakes Mr. Cogley embraces. But, if they were any, the imperfections of his performance gave way to the perfect harmonies it created within each being that was present. You can learn more about The Saturday Giant (aka Phillip Cogley) and his music by exploring his Facebook Page at www.facebook.com/thesaturdaygiant.

As the final musical footsteps of The Saturday Giant echoed throughout the venue, a break ensued. It was during this time did The Living Room’s denizens seek to learn more about the featured guest and about themselves through the words he relayed to them. The break ended as Benjamin Ordonez took the stage and shared his poetic words which spoke of what parenting could be along with the joys of love experienced beyond that relationship until someone almost runs off with all of one’s stuff. Benjamin was followed by a Newcomer to the event named Joe Shayka who shared his poetry with the gathering. He was followed by Guitarist Dee Allen whose familiar riffs and voice moved the audience to the home they found in her songs.

Dee was followed by a Newcomer to the event named Jillian whose poetry moved to the meter of life giving all who heard her a deeper sense of the beauty that awaited them if they opened their heart to see it. She was followed on stage by Kevin Tails Moucha who sought the essence of the soul through his a cappella renderings. Kevin was followed by the final performance of the evening who were a duet known as Mimi D www.facebook.com/FissionandMDPsMimiD?fref=ts and A. P. Biznatch (in Derby) who shared a sultry cabaret version of the song, “Fever” whose  climatic effect on me was so compulsory that it compelled me to get a flu shot the very next day. It was when the final notes of the performance came to a completion did the gathering being to share their farewells as they collectively anticipated their return to the following week’s event. You’ll be able to find more photographs taken during the Sunday September 28th Open Mic Nite Session in The Living Room 2014 Gallery Part 4 at www.facebook.com/forwardian.dude/media_set?set=a.10152489839930421.1073741902.636000420&type=3.

The next installment of the Living Room Open Mic Nite Series will take place on Sunday October 5th beginning at 7pm with sign ins beginning at 6:30pm. Musicians, poets, writers, and anyone who would like to share something with a receptive audience are welcomed to do so. You can learn more about The Living Room Open Mic Nite Series by Exploring their Facebook Page at www.facebook.com/OpenMicAtTheLivingRoom.

In addition to the Open Mic Nites presented at The Living Room, the venue also holds a Gallery which presents their current exhibition titled, “Art I Activism” featuring the work of artists from around the area. Their next exhibit will take place in October and will be titled, “Night of the Living Room” featuring the works of RenDi Young www.facebook.com/TheAltarStudios, Timothy Nebel, Kayla O’Connor www.facebook.com/kaylaoconnorart, and Will Mgrath. The Artists’ Reception will take place Saturday June October 4th beginning at 6pm and will include a Costume Contest. The exhibition will continues to be on display until October 27th. Please contact the gallery’s Director and Curators, Keyaira and Drew Ozkenel, at 570-421-2808 for more information.

The Living Room is located on Main Street in Stroudsburg, PA next to The Sherman Theater who owns the building. The Living Room is a non-profit artspace and community hub featuring live music, exhibitions, and other events in an intimate setting at affordable prices. Please Explore The Living Room Facebook Page at www.facebook.com/pages/The-Living-Room/123978921059378 for more information on The Living Room, all they have to offer, and how to be a part of it all.
Posted by Unknown at 3:27 PM