An Aesthetic Journey into Reality’s Dreams 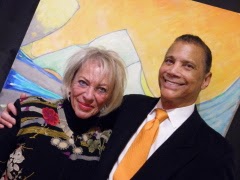 As the seasonal hues of Autumn filled the air with its brisk presence, The SOHO in the BURG Gallery in Stroudsburg, PA reflected the dreamlike adventures the season portends through their “Dream/Reality” exhibition featuring the work of local Artists along with their “Journey Into The Aesthetics!” exhibition which presented the work of H. Lloyd Weston. The artists’ reception was held on Saturday November 1st and featured music performed by various musicians of great talent, tasty morsels of food provided by Flying Merswine Catering www.facebook.com/pages/Flying-Merswine/368792593272368?ref=br_tf, and a great amount of wine with tastings provided by Tolino Vineyards www.facebook.com/TolinoVino. A plentiful number of Art lovers flowed into the gallery to share in the festivities along with the gentle conversation found in the welcoming atmosphere the venue is deservedly reputed to inspire.

The Journey Into The Aesthetics exhibition featuring the work of H. Lloyd Weston was seen immediately as one entered the gallery as the work was hung in its main room. The magnificence of each piece captivated the eye through its intricate simplicity depicting the warming sensations found in the colors of the soul. The entirety of the exhibition embarked upon an exploration of the relationship between human kind and nature revealing the symmetric qualities found in each in spite of the apparent, illusionary segregation of the two. The beauty found in the images contained in their frames thoughtfully lingered with those who viewed them as they escaped their confinements and found a home within the boundless essence of the viewers’ imagination.

The remainder of the gallery presented a plethora of images and sculptures created by local artists exploring the essence of dreams and their intimate, multidimensional relationship to reality throughout the Dream/Reality exhibition. The work encompassed a vast array of interpretations of the display’s theme with each piece freely wandering into the estuaries of imagination through their psychotropic properties. The entirety of the exhibit created a mesmerizing sensation among the gathering which allowed the mind to come to a resting point from which one could freely realize the effects the of the art had on his/her being until the realization that all reality begins as a dream became a central truth to their conscious understanding.

The life enriching elements of the exhibitions were enhanced by the music performed throughout the evening by various musicians. The jazzy elements of the lively and soothing tunes cascaded upon the ears of the gathering inviting each and every person to become one with the conversational notes found in their measured communiqués. A dance of smiles and gentle sways accompanied each composition as the company of listeners allowed their forms to be guided by the rhythms both they and the intertwining music possessed.

The flavor of the exhibit was further enhanced by the culinary treats and libations that were present and lovingly consumed throughout the evening. Flying Merswine Catering provided an assortment of delightfully delicious appetizers which were readily picked up by those who gathered by their table. A chorus of Mmmmms accompanied each bite as harmonizing smiles communicated their satisfied sentiments to their fellow diners. The wine provided by Tolino Vineyards proved to be an excellent compliment to the victuals provided as the properties of the elixirs touching the tongue bought about an even more profound enjoyment of the food.

The combination of art, music, food, drink, and conversation helped make the evening spent at The SOHO in the BURG Gallery another delightful one. These aforementioned ingredients were lovingly mixed together by the gallery’s owner, Andrea Robbins Rimberg, who eagerly greets each visitor as they arrive with her effervescent smile and welcoming demeanor. The effect she has on those who enter the gallery never fails to be an infectious one and lingers in the heart for a lifetime of recollections. You’ll find more photographs taken during the Saturday November 1st Artists’ Reception for The SOHO in the BURG Gallery’s Picture Perfect exhibition in The Stroudsburg Art District 2014 Gallery at www.facebook.com/media/set/?set=a.10152239353790421.1073741877.636000420&type=1.

H. Lloyd Weston was born in Jamaica and is a graduate of Fairleigh Dickinson University. Besides being an accomplished painter, Mr. Weston the author of six poetry collections and one volume of short stories. He is a member of the Academy of American Poets and his visual work is featured in the International Contemporary Masters Art Book, VOL. IV. His work as presented at The SOHO in the BURG Gallery is well worthwhile visiting as is the work of the many local artists are also on display. You can learn more about H. Lloyd Weston and his work by exploring his Facebook Page at www.facebook.com/LloydWestonGroup.

The SOHO in the BURG Gallery is located on the corner of 6th and Main Street in Stroudsburg, PA which was the location of the J. J. Newberry’s store. The gallery opened its doors to the public in April of 2012 and is owned by Andrea Robbins Rimberg who has become well known for her exuberant energies and creativity as many of her pieces are on display in prestigious galleries throughout the United States. The title of the next exhibition to be presented at The SOHO in the BURG Gallery will be announced soon. You can learn more about The SOHO in the BURG Gallery, their future exhibits, and all the gallery has to offer the creative community by exploring their Facebook Page at www.facebook.com/sohointheburg.
Posted by Unknown at 5:06 PM