The Changeable Qualities of Art 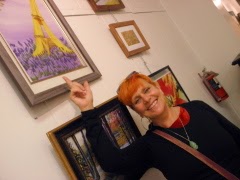 The School of Visual and Performing Arts (SVPA) in Stroudsburg, PA held an Artists’ Reception on Saturday September 20th for their exhibition titled, “Changing Seasons, Changing Scenes” featuring the work of local artists. With the hues indicative of the Autumnal season already touching the local vegetation, the school’s exhibition arrived at an opportune time as the foliaged beauty many of the attendees have come to admire were reflected in the work presented. The array of colors and images echoed the enormous talent of the artists who participated in the exhibit as their unique approaches to the theme blended well together while maintaining the creative voice of each distinctive artists.

The many art lovers who attended the Reception soon found themselves swept away by the qualities of the work as the individual intricacies if each piece began to produce a seasonal change within the viewer. Yet, as one moved through the gallery, the enchantments embodied in the art of Aerial Acrobatics enticed the gathering as Alexandra “Sashka” Apjarova of Fly With Sashka www.facebook.com/flywithsashka encased herself in a silken hammock while her flowing movements were being photographed by the renowned photographic artists who came to capture her maneuverings in their cameras. It was a delight to watch Ms. Apjarova share her considerable skills as the beauty of the discipline went beyond the physical attributes of the art form and allowed the soul of each person who experienced the performance to become entwined within the claming cocoon of its aesthetic qualities. She was joined by her son during several routines which made them all the more enjoyable to watch.

As the mesmerizing effects of Ms. Apjarova’s exhibition encompassed the gathering, the gallery’s curator, Jody Singer, publicly shared the school’s welcoming words with the crowd along with several announcements relating to the establishment’s future endeavors as well as those of other groups and individuals such as Project Street Art www.facebook.com/projectstreetart that will enhance the local community through the arts. It was soon after Mr. Singer concluded his remarks did students from The Diane Verdi Ballet Class take the stage to perform the neo-classical ballet titled, “Rhapsody” with the music of Rachmaninoff. The gentle touching of the floor by the dancers brought a sensation of lightness to the audience who soon felt like leaves softly falling collectively to the ground. It was at the conclusion of the performance did Ms. Verdi take the stage in order to enhance the appreciation of the art of Ballet by sharing many of its technical intricacies with the audience. Lessons in dance are taught by Ms. Verdi at the school and you can learn more information about them as well as how to register by calling 570-619-4113 or by emailing her at D1108@ptd.net.

It was after Ms. Verdi shared the art of dance with the crowd did their attention return to Ms. Apjarova who presented a more expansive demonstration of her skill in Aerial Acrobatics. The beauty of her movements cast further enchantments on the gathering and touched the hearts of many. Ms. Alexandra “Sashka” Apjarova was born and raised in east Slovakia and immigrated to the United States in 1994 to pursue her dreams relating to the art of dance. While in the US, she developed a career as a professional dancer, aerialist, model, actor, singer, and coach upon she became internationally recognized for her outstanding talents. She Along collaborated with Michael Jackson in the “This is it” project until his untimely passing and Cirque du Soleil’s “Delirium” tour. Ms. Apjarova will be teaching courses in Aerial Acrobatics and other related subjects at The School of Visual and Performing Arts in October. Please contact her at Apjarova@gmail.com or by calling 646-732-8054 for more information and to register.

As the performance given by Ms. Apjarova concluded, Rick Delgado of the duo known as “Public Displays of Rejection” www.facebook.com/PublicDisplaysOfRejection took the stage. With the use of a great deal of technology, Mr. Delgado strummed his guitar and shared his voice in a series of sounds which inundated the senses through their echoing harmonies. Many of his renditions of the works he performed had a haunting effect upon the crowd as the spirits embodied in each note moved within and without them until their presence materialized in the rooms of their souls. Mr. Delgado is usually joined by fellow musician Shane Reimer but he was not present during the event.

The soothingly haunting sounds of Mr. Delgado were heard throughout most of the evening until the 9pm hour arrived and the much anticipated announcement that the Art Raffle was about to begin was shared. Many of those present eagerly engaged in making last minute purchases of Raffle Tickets in hopes this would be their lucky night. Many of the artists who participated in the exhibition donated their work to be utilized as Raffle Items and their inherent qualities made them all the more desirable to obtain through the Raffle process. The work was further enhanced by Ms. Ashley Fontones who elegantly held each piece so it could be viewed by the gathering.

Soon, the numbers began to be read and each digit became a source of excitement that built to a fevered pitch until the ecstatic peals of the winners were heard. The disappointment those who didn’t hold the winning tickets were slighted by their own desire to share their congratulations with those who did and to celebrate in their victories. It was after the last item was given to the final ticket holder did the gathering of friends begin to share their farewells with one another and sought to go home so they could reflect upon the wonders of the evening while anticipating the arrival of the next event to be held at The School of Visual and Performing Arts (SVPA). You’ll find more photographs taken during the Artists’ Reception in The SVPA 2014 Gallery at www.facebook.com/media/set/?set=a.10152519973960421.1073741905.636000420&type=1.

The School of Visual and Performing Arts is located in Stroudsburg, PA and has been instrumental in the creative development of its students for over 20 years. The facility holds classes in dance, ballet, and movement led by Diane Verdi, Paula Heeschen, and Kathy Kroll as well as classes in the theater arts led by Jazmin Ospa and Shellie Bransford. The school also offers a number of workshops with each focusing on a variety of creative disciplines. You can learn more about The School of Visual and Performing Arts by exploring their Website at www.schoolofvisualandperformingarts.org or their Facebook Page at www.facebook.com/schoolofvisualandperformingarts.

The exhibition titled, “Changing Seasons, Changing Scenes” will be on display in The School of Visual and Performing Arts until October 13th. The entirety of the work in extremely well done and explores the theme in various ways with every piece presented holding something wonderful for each individual who views it. Their next exhibit is titled, “Beyond the Harvest” with an Artists’ Reception scheduled for Saturday October 18th beginning at 6pm. The exhibit will continue to be on display until December 15th. All area artists are welcomed to participate by placing their work related to the theme in the exhibit. The drop off dates are October 16th and 17th. Please contact Jody Singer at mountainsidearts@hotmail.com for more information.
Posted by Unknown at 10:24 AM