Pictorial Perfection at The SOHO 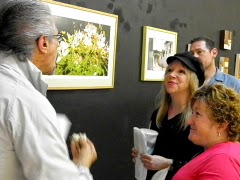 As the 8th Annual Stroudfest event whose day long celebration of all things Stroudsburg was coming to a close, The SOHO in the BURG in Stroudsburg, PA held an Artists’ Reception for their “Picture Perfect” show on Saturday August 30th. The exhibit featured work created by a multitude of local artists and photographers with nearly 150 pieces lining the gallery’s walls. The outstanding quality of the work touched the imagination and inspired the mind of each attendee to not only to experience the fullness of the images conveyed in each individual piece but to allow their complimentary visions created from within to merge with the work.

The lively conversation shared by the numerous art lovers and artists who were present reflected the excitement the work generated. The variety of subject matter and techniques employed by each artist enchanted the viewer enticing one to delve deeply into the essence of the piece. This was particularly true of the more abstract of the work presented as their colors and curvatures led each person who were touched by them on an inner journey that remains indefinable.

Along with the art being shown for the exhibit, a special area was set up which featured the work of Lui Jun who came to the area in 2011 to study Art Research at The East Stroudsburg University of PA. He returned to the area this year to do more research and to share his talents so the citizens of the Monroe County area can benefit from them. In this endeavor, his work was offered as Raffle items whose proceeds would benefit either Women’s Resources, Pocono Area Transitional Housing (PATH), The Salvation Army, or The Y. M. C. A. The decision on which of these charitable organizations the monies raised will go to will be left to the individual who wins the raffle. You may purchase your tickets at The SOHO in the BURG Gallery during their business hours of 12-5pm on Thursdays as well as on Fridays and Saturdays from 12 to 8pm.

The late afternoon and early evening spent at The SOHO in the BURG Gallery was an enjoyable one filled with wonderful art, good company, and delicious foods. The atmosphere of the venue never fails to delight those who enter it as its owner, Andrea Robbins Rimberg, eagerly greets each visitor as they arrive with her effervescent smile and welcoming demeanor.  You’ll find more photographs taken during the Saturday August 30th Artists’ Reception for The SOHO in the BURG Gallery’s Picture Perfect exhibition in The Stroudsburg Art District 2014 Gallery at www.facebook.com/media/set/?set=a.10152239353790421.1073741877.636000420&type=1.

The SOHO in the BURG Gallery is located on the corner of 6th and Main Street in Stroudsburg, PA which was the location of the J. J. Newberry’s store. The gallery opened its doors to the public in April of 2012 and is owned by Andrea Robbins Rimberg who has become well known for her exuberant energies and creativity as many of her pieces are on display in prestigious galleries throughout the United States. The title of the next exhibition to be presented at The SOHO in the BURG Gallery will be announced soon. You can learn more about The SOHO in the BURG Gallery, their future exhibits, and all the gallery has to offer the creative community by exploring their Facebook Page at www.facebook.com/sohointheburg.
Posted by Unknown at 11:14 AM