A Town Celebrates with Stroudfest 8 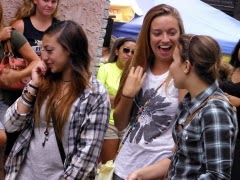 The 8th Annual Stroudfest event took place throughout the little town of Stroudsburg, PA on Saturday August 30th. The sidewalks were lined with merchandise the many shopkeepers who has established themselves as part of the local business community had placed in front of their stores along with venders who shared their crafts, retail items, and charitable opportunities with those who visited them. The day was also filled with music as festival goers walked the streets to enjoy the offerings of the event.

My day at the festival began in the alley found between Josephine's Fleur-de-lis www.facebook.com/pages/Josephines-Fleur-de-lis/292592820756374 and The 14KT Outlet’s Fine Jewelry Design www.facebook.com/The14ktOutlet. In this alley, there stood the stage where the town’s Music  in the Park Series takes place from which the band “Wolf And The Lost Ones” www.facebook.com/wolfandthelostones seduced the audience with their smooth juicy soul renditions flowing through their instruments and voices creating a mellow atmosphere among the gathering until they performed a number of fast tempo pieces that stirred many a heart to dance. I enjoyed listening to the quartet until the whispers of the festival bade me to explore its other offerings.

I walked along the Main Street of Stroudsburg and was met by the sight of commerce. Stores filled the sidewalk with their wares which ranged from sporting goods to shoes while vendors that inhabited the area along the edge of the sidewalk offered even more of a variety to those who stopped by their tent. These included tie dyed apparel sold by Shady River Designs www.facebook.com/shadyriverdesigns, Melon Gift www.facebook.com/melons.gift?fref=ts who will have their Annual Fun Dog Show on Saturday September 27th at The Stroudsburg Intermediate School in Stroudsburg, PA, and Kitchen Chemistry www.facebook.com/pages/kitchen-chemistry/245276232196 who makes some really good bakery items, and For The Birds gaingrant2074@yahoo.com who creates some exquisite bird houses. It was during my visitations to these vendors did I come to the vicinity of The Living Room.

The venue was empty except for the presence of the art what was first presented in the gallery at the beginning of August and the gallery sitter whose welcoming demeanor enhanced the beauty of the work. The artists whose visions were on display were Joy Taney, Carolyn Burbage, Hannah Brush, and Michelle Neifert. It was good to be able to quietly explore the essence of each piece and to learn all they had to teach me. It was quite a lot of lesson filled work on display and I became enthralled by their intricacies. The next exhibition The Living Room in Stroudsburg, PA will be their Art is Activism group show featuring the work of local artists. The Artists’ Reception will be held on Saturday September 6th beginning at 6pm with the work continuing to be on display until September 30th. Please explore The Living Room Facebook Page at  www.facebook.com/shermanlivingroom for more information.

I eventually left The Living Room and continued my journeys through the town. I encountered more vendors with whom I enjoyed sharing conversation with while being fascinated by the wares they offered. These included Nightwind Studios www.facebook.com/pages/Nightwind-Studios/184461401597538 who offers custom art designs, Health Coach Carolyn Caruso www.facebook.com/MyOwnFit who offers individualized healthy lifestyle planning, and Fairy Godmothers magic191@ptd.net who offers an opportunity to all who partake of their merchandise to live their fanciful dreams. I also visited The School of Visual and Performing Arts who will host The Theater Studio: A Confidence Theater www.facebook.com/pages/Theater-Studio-A-Confidence-Theater/258915317642152 production of Sleeping Beauty on Sunday September 7th beginning at 6pm. It was a delight to meet the vendors as our chats enhanced my day.

It was during these explorations did I come upon the tent inhabited by Project Street Art which is a local community art endeavor created to beautify the area through a number of artistic initiatives. The first of these initiatives was the creation of a mural constructed along a section of the town’s Main Street that was touched by fire several years ago. The mural was completed in a one day event on Saturday May 24th, 2014 and can be seen on the 600 block of the town. The next project is scheduled to take place on Saturday September 27th and will consist of murals being painted at 10 different sites in the Stroudsburg and East Stroudsburg area. You can learn more about Project Street Art and how to become involved in this worthy endeavor by exploring their Facebook Page at www.facebook.com/projectstreetart?ref=br_tf for more information.

After conversing and being creatively energized by the Project Street Art gang, I ventured to the town’s courthouse square where music was being heard and a variety of foods were being enthusiastically consumed. A great number of people were there and it was good to meet up with many of my friends who were among them. Reacquainting conversations filled me with memories as the nearly forgotten affections we had for each other so many years ago were rekindled. The band that was on stage were completing it’s set so I didn’t hear much of their performance, but I left the area with a song in my heart that I shall continue to sing for quite some time.

I then ventured back to the Music in the Park Stage to listen to Woodrow www.facebook.com/wearewoodrow who consists of Brian Bramcamp on Guitar and vocals and Theresa Ratcliff on vocals. The duet’s renditions of classic songs never fails to surpass the qualities of their original versions as seen in the delighted eyes of those who were listening. It was during their performance did they share a number of original pieces whose calibre favorably compared to the classic tunes they sung. It was sometime afterwards did I bid farewell to the 8th Annual Stroudfest event as my adventurous desires let me to explore elsewhere. It was a good day and I’m glad I was able to attend. You’ll find more photographs taken during the 8th Annual Stroudfest Event in The Stroudfest 2014 Gallery at www.facebook.com/media/set/?set=a.10152679878780421.1073741909.636000420&type=1.

The 8th Annual Stroudfest event was organized and presented by the Sherman Theater as one of the festivals it formulated which is designed to honor the town of Stroudsburg, PA. Sponsors of Stroudfest 2014 included numerous local businesses who support the town and its endeavors. In addition to Stroudfest the theater presents The Pocono Raceway Festival which takes place in June as well as numerous concerts, theatrical productions, and other events throughout the year. You can learn more about The Sherman Theater and all it has to offer the community by exploring their Facebook Page at www.facebook.com/ShermanTheater?ref=ts&fref=ts.
Posted by Unknown at 11:09 AM