Rambling Upon The Gazebo Blue Grass 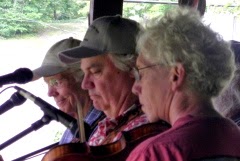 A gentle day touched the hearts of the music lovers who gathered upon the grounds of The Presbyterian Church of the Mountain in Delaware Water Gap, PA on Sunday June 8th as they prepared to enjoy another segment of their Summer Gazebo Concert Series. The warm weather and the smell of Hot Dogs cooking on a grill combined with the congenial nature of the greetings shared among members of the sizable crowd as they placed their chairs and blankets upon the freshly mowed lawn. The conversations inspired by the day quieted as the evening’s host, Jim Dellaria, stepped upon the stage in order to share his welcoming words and to introduce the eagerly awaited musicians to their audience.

The Lost Ramblers is often seen by the many who have come to enjoy their performances strolling around festival sites while playing their renditions of Bluegrass compositions. It is a rare occurrence to see the group of musicians who consists of Neil Armstrong on Vocals and Guitar, John Updike on Banjo and Vocals, Jim Schaefer on Upright Bass, and Dave Husic on Fiddle standing stationary upon a stage but such a sight enhanced the enjoyable nature of their performance. However, what is not rare is the groups ability to softly touch the deep wells of the earthy aspects of the listener’s soul through songs originating from eras that transcend the times they were written. A contemplative gaze could be seen upon many of the faces in the audience only to be interrupted by the demonstrated desire to engage in toe tapping, hand clapping, and their voices as they sang along during several of the songs that inspired a communal response. What a great way to spend an afternoon.

The Summer Gazebo Concert Series at The Presbyterian Church of the Mountain (PCOM) began in 1990 and is presented every Sunday evening throughout the Summer months until the end of August in order to support the local musicians and provide a venue where all ages could learn to appreciate Jazz and acoustic music. In reflection of Delaware Water Gap, PA being considered a Mecca for the Jazz community, the concerts has a great number of Jazz performances in their schedule. However, all musical styles are showcased during the summer which includes Blue Grass and Classical Music. The next installment in The Presbyterian Church of the Mountain Summer Gazebo Concert Series for 2014 is scheduled for Sunday June 22nd and will feature Vinny Bianchi and Jazz Juice (It’s Good for You). The concert is free to the public and begins at 6pm. You’ll be able to find more photographs taken during The Lost Ramblers concert in The PCOM 2014 Gallery at www.facebook.com/media/set/?set=a.10152489811720421.1073741901.636000420&type=1.

According to their website, The Presbyterian Church of the Mountain is “… a community of disciples illuminated by God’s love who care for others spiritually, emotionally, physically, and financially as we explore new avenues of grace and grow in faith through worship and service.” In an endeavor to manifest the goals of this statement, they hold weekly services every Sunday beginning at 10am, provide a hostel for those hikers who travel along the Appalachian Trail as well as holding a Hikers’ Dinner every Thursday evening throughout the Summer Months to replenish their energies. They also support the Kenyan village of Amilo by providing a school feeding program for 15 orphans, a well, housing, and simple medical care and information to the villagers and the church shares a partnership with the Reformed Church located in Cardenaz, Cuba. In addition to all this, they support the local Fire Company and Women’s Resources Center as well as provide community aid funds for residents who are suffering economic burdens. The size of the congregation is approximately 200 people. Please Explore The Presbyterian Church of the Mountain Facebook Page at www.facebook.com/pages/Presbyterian-Church-of-the-Mountain/234593743269661 for more information.
Posted by Unknown at 2:10 PM