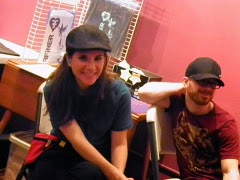 The Sherman Theater’s Living Room Stroudsburg, PA the doors to their weekly Open Mic Nite event on Sunday June 1st at 6pm in order to receive the signatures of those who wish to share their talents by placing them upon the establishment’s list at 6:30pm. The performances were scheduled to begin at 7pm. By all accounts, all of this did occurred as preordained but I arrived later than usual to the event and missed these initiating experiences along with a number of performers who took the stage prior to my arrival.

However, when I did arrive, I was greeted by the music of a band known as Finer who where the featured performers for the evening. The band consists of the husband and wife duo of  Stacy Basner and Ethan James who took turns performing on guitar and an electronic keyboard as well as a computerized apparatus with Ms. Basner lending her vocal gifts to the songs they presented to the venue’s appreciative audience. The music they performed proved to be a lively mix resembling those related to the dance or techno music genre but embodying a certain distinction in their lyrical qualities to transcend the mere dance-ability of the popular forms. After performing a number of songs together, hey were joined by musical provocateur, Wilbium, who accompanied them on drums adding a supplemental beat to their musical endeavors.

Although Ms. Basner and Mr. James originated from separate areas of The United States, they both found themselves at the Musician’s Institute in Hollywood, CA where they were attending classes in order to (at first) individually enhance their musical talents. Their love for music soon coupled with a profound love for one another and they (along with their considerable musical talents) became married. They are currently sharing their unique blend consisting of each song containing elements found in danceable music while embodying a soul of its own that is embraced by those who are brought into each composition by the couple’s loving entreatments as they travel on tour to a number of venues. It was fortunate for the denizens of The Living Room’s Open Mic Nite to be a part of their journeys as their musical gifts touched an exuberant chord in those who heard them. You can learn more about Finer and their recent CD titled, “Magic Til The End” by exploring their Facebook Page at www.facebook.com/finerband.

As the final echoes of Finer were absorbed by the room, a break ensued so the instrumentality of the band could be removed so the following performers would have the space they needed to share their enormous talents. The first of these to present their gifts after the break was Kevin Tails Moucha who sang a number of original pieces a cappella as written upon his laptop computer and was well received by those who felt their words in their hearts. He was followed by Benjamin Ordonez whose powerful delivery of some familiar poems as well as some newer pieces moved among the gathering enabling many to greet their emotions afresh. He was followed by a guitarist known as, “OK Enough” whose powerful rendering of his songs flowed through the audience in their thoughtfulness. He was followed by C’ Rock One Thirteen who began his set upon his electric guitar with a song that had previously been established by another artist and followed his interpretation of the piece with a number of his own soul touching originals.

C’ Rock One Thirteen was followed by Guitarist Vinnie Huevos whose hard hitting and irreverent lyrics never fails to delight the audience. The June 1st Open Mic Nite proved to be no exception as Vinnie rocked the house as a Living Room Denizen known as “Fred” accompanied him on drums. The evening concluded with a performance given by Wilbium who enhanced his well admired instrumental performance by including a number of songs in which he sung. These included some hard hitting Hip Hop along with some compositions that rocked the house as many danced during its quaking semblances. It was during his performance that it was announced the day marked Wilbium’s birthday and the company gladly celebrated in the singing of the traditional song associated with the occasion. It was then those who remained were bided farewell and everyone left with the desire to return the following week to partake of the offerings future Open Mic Nites holds for them. You’ll be able to find more photographs taken during the Sunday June 1st Open Mic Nite Session in The Living Room 2014 Gallery Part 3 at www.facebook.com/media/set/?set=a.10152343904050421.1073741890.636000420&type=1.

The next installment of the Living Room Open Mic Nite Series will take place on Sunday June 8th beginning at 7pm with sign ins beginning at 6:30pm. Musicians, poets, writers, and anyone who would like to share something with a receptive audience are welcomed to do so. It was during the June 1st event was it announced the Scavenger Hunt to determine who will be a future co host for the events was made with flyers detailing the items to be gathered was distributed among the gathering. You can learn more about The Living Room Open Mic Nite Series and the Scavenger Hunt by Exploring their Facebook Page at www.facebook.com/OpenMicAtTheLivingRoom.

In addition to the Open Mic Nites presented at The Living Room, the venue also holds a Gallery which presents the work of visual artists from around the area. Their current exhibition is titled, “Art-ology” and features the work of artists from around the area. Their next exhibit will take place in June featuring the works of Kelly Ann Klee (aka Girl from Mars), Laurinda Faye Rubin, James Chesnick, and Jeff Echevarria. The Artists’ Reception will take place Saturday June 7th beginning at 6pm and will  celebrate National candy month: Willy Wonka Style. Music will be provided by SunnyShady and candy will be provided by Earthlight Natural Foods along with a golden ticket contest and an art raffle. The exhibition will continues to be on display until June 30th. Please contact the gallery’s Director and Curators, Keyaira and Drew Ozkenel, at 570-421-2808 for more information.

The Living Room is located on Main Street in Stroudsburg, PA next to The Sherman Theater who owns the building. The Living Room is a non-profit artspace and community hub featuring live music, performance, and other events in an intimate setting at affordable prices. Please Explore The Living Room Facebook Page at www.facebook.com/pages/The-Living-Room/123978921059378 for more information on The Living Room, all they have to offer, and how to be a part of it all.
Posted by Unknown at 3:01 PM