Partying at The OMN 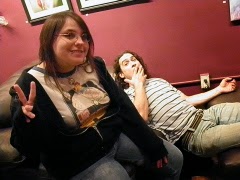 The Sherman Theater’s Living Room Stroudsburg, PA held their weekly Open Mic Nite event on Sunday June 8th offering an opportunity to the numerous talented individuals and groups to share their gifts with an accepting audience. I arrived late to the event as C’ Rock One Thirteen www.facebook.com/crock113officialmusic was preparing to perform. Many who have witnessed the musician’s expertise with the electric guitar discovered a new dimension to his considerable talents as he strummed song after song on an acoustic guitar. The instrument provided each song he rendered upon the audience with a more subtle quality allowing the composition to be felt as well as heard on a profound level.

C’ Rock One Thirteen was followed to the stage by a newcomer to the event named, Krystal Waltz. The young woman bravely shared her comedy routine with an audience who encouraged her through every utterance and gesture during her first attempt in the genre. She was followed by Guitarist Vinnie Huevos who was accompanied by the event’s co host AP www.facebook.com/APbboxes4u on vocal percussions, Nicholas Desouza on Bass guitar, and Tyler Hartle who sat upon a box he utilized as a percussion instrument. Together, they rocked the house inspiring a great deal of dancing especially during their performance of a bubblegum pop song titled, “Sugar Sugar” which was written by Jeff Barry and Andy Kim in 1969 and performed originally by The Archies who were a virtual band consisting of characters from an animated TV series titled, “The Archie Show” which aired Saturday mornings on The Columbia Broadcasting System (CBS) in 1968.

As Vinnie Huevos and company completed their set, the evening’s co host announced a break would soon be taking place. But first, a moment was given to celebrate the birth of Paul Adam Smeltz (yeah that’s me) whose birthday was that day. A cupcake from a pack of Hostess cupcakes was lovingly delivered with a candle atop of it by a poet known as The Carlton as the company of friends sang the happy birthday song which was written by Kindergarten teachers, Mildred and Patty Hill, in 1893. And no, I was not one of their students.

The break was filled with conversations inspired by the evening’s performances that took place up to that point. These verbal exchanges concluded as the poet known as The Carlton took the stage and shared some comedy along with a number of thoughtful poetic pieces as he built an everlasting rapport with the audience. He was followed by Kevin “Tails” Moucha whose a cappella renderings entertained the crowd as the delivery of the songs he sang focus upon the deeper meaning of the words they enveloped. He was followed by a poetic duet known as “Day and Tilly” whose profound and moving poetry expressed a meaning that was embodied in a realm where words are yet to be born. They were followed by Benjamin Ordonez whose commanding voice echoed the poetry’s beat reflecting the pulse of life. He was followed by Melissa Johnson who was joined by co host AP. Together, they sang and danced while bopping the house fantastic with songs ranging from those originating from Imagine Dragons to the Jackson Five.

The official list of performances came to it’s end as electronic music artist Wilbium manned his keyboard and guitar readying the audience for their flight into the netherworlds of the imagination. Trancelike dancing filled the room as each hypnotic note created a melody of translucent dreams. As the music and the experience it inspired came to its conclusion, it was announced there was more time available for the event so those whose names were on the waiting list could share their talents.

The first of these performers was a duet known as “Ryan and Cory” who enlivened the crowd with their tunes. They were followed by a Guitarist known as “James” whose deep lyrics and voice brought a haunting element to the songs he played inspiring their essential qualities to become manifested in the thoughts of those who were touched by them. The evening concluded by a very brief performance given by a Guitarist known as “Geo” who blasted his song upon an audience who soon yearned for another week to pass so they could experience another Open Mic Nite Session. You’ll be able to find more photographs taken during the Sunday June 8th Open Mic Nite Session in The Living Room 2014 Gallery Part 3 at www.facebook.com/media/set/?set=a.10152343904050421.1073741890.636000420&type=1 and Part 4 at www.facebook.com/forwardian.dude/media_set?set=a.10152489839930421.1073741902.636000420&type=3.

The next installment of the Living Room Open Mic Nite Series will take place on Sunday June 22nd beginning at 7pm with sign ins beginning at 6:30pm. The featured band for the evening will be Kill The Red Queen www.facebook.com/pages/Kill-The-Red-Queen/262246083884298. Musicians, poets, writers, and anyone who would like to share something with a receptive audience are welcomed to do so. You can learn more about The Living Room Open Mic Nite Series by Exploring their Facebook Page at www.facebook.com/OpenMicAtTheLivingRoom.

In addition to the Open Mic Nites presented at The Living Room, the venue also holds a Gallery which presents the work of visual artists from around the area. Their current exhibition features the works of Kelly Ann Klee (aka Girl from Mars), Laurinda Faye Rubin, James Chesnick, and Jeff Echevarria and will be on display until June 30th. Their gallery’s next exhibit will be a group show inviting local artists to utilize a steam punk technology theme titled, “1850’s Carnivale.” The work can be presented in any medium and/or style the artist wished to explore. The Artists’ Reception will be held on Saturday July 5th beginning at 6pm and will continue to be on display until July 30th. Submissions of work will be accepted on Thursday July 3rd from 6 until 9pm. Please contact the gallery’s Directors and Curators, Keyaira Lynn Von Dred and Andrew Ozkenel, at 570-421-2808 for more information.

The Living Room is located on Main Street in Stroudsburg, PA next to The Sherman Theater who owns the building. The Living Room is a non-profit artspace and community hub featuring live music, performance, and other events in an intimate setting at affordable prices. Please Explore The Living Room Facebook Page at www.facebook.com/pages/The-Living-Room/123978921059378 for more information on The Living Room, all they have to offer, and how to be a part of it all.
Posted by Unknown at 2:13 PM