A Living Room as Sweet as Candy 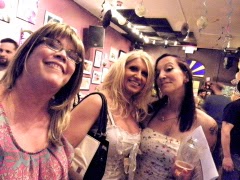 The Sherman Theater’s The Living Room Gallery in Stroudsburg, PA celebrated National candy month with an Artists’ Reception on Saturday June 7th for their June Exhibition featuring the work of Kelly Ann Klee (aka Girl from Mars), Laurinda Faye Rubin, James Chesnick, and Jeff Echevarria. The confectionary colors of the exhibit immediately overwhelmed the senses as the sizable gathering who had come to partake of the evening’s wonders were inspired to utter a number of oooos and ahhhhhs upon their entry into the delectable lair. These verbal expressions of amazement echoed throughout the room until the were slightly quelled by the eager consumption of sweet culinary delights provided by Earthlight Natural Foods www.facebook.com/earthlightnatural, Kitchen Chemistry www.facebook.com/pages/kitchen-chemistry/245276232196, and friends of the gallery who wished to share their sweet baking skills.

The celebration was enhanced by the Willy Wonka theme which was derived from the children’s book titled, “Charlie and the Chocolate Factory” written by Roald Dahl around 1964. It was followed by a sequel “Charlie and the Great Glass Elevator” and the books became known for their unexpected endings filled with some dark humor. The books inspired two film adaptations. The first of these films was titled, “Willy Wonka and the Chocolate Factory” which was directed by Mel Stuart in 1971 and starred Gene Wilder as Willy Wonka. The second film was titled, “Charlie and the Chocolate Factory” which was directed by Tim Burton in 2005 and starred Johnny Depp as Willy Wonka. Although the stylings of both films were well represented, the cinematic atmosphere created in the 1971 interpretation of the books seemed to hold a slight dominance to The Living Room’s furnishings for the evening.

To enhance the celebratory mood and the theme for the evening, three Golden Tickets (in reference to the plot of the Roald Dahl book) were concealed inside the wrappers of the many Willie Wonka Chocolate Bars that were on sale.  Those who had bought the three bars with the winning tickets inside were awarded with admission to a concert titled, “An Evening with Moe www.moe.org” which is scheduled to take place at The Sherman Theater in Stroudsburg, PA on Friday July 28th. A frantic candy grab took place throughout the evening until nearly all of the bars were purchased and delighted yelps were heard from those who found the coveted item.

The sweetness of the evening included the sounds emanating from a guitarist known as SunnyShady who has become a favorite among those who frequent The Living Room’s Open Mic Nite Series held every Sunday evening. The thoughtful and joyous contrasts embodied in his renditions of well established compositions as well as original pieces he shared with the crowd moved skillfully among their waiting ears. The artistic flexibility of the musician was further demonstrated as two unscheduled performers joined him on stage in song. The camaraderie between the three proved to be infectious as the scene as well as the congenial qualities of the songs they performed touched the conversations of the room’s population.

Among the sounds, confectionary delights, and the contestial excitement, the art that was featured in the exhibit flowed together like a syrupy elixir of a concoction filled with dreams. Yet, this flow did not diminished the nuanced qualities found in each artist’s individualized approach to his/her creative endeavors. Instead, it inspired those who became enamored by the entirety of the exhibition to delve deeper into each piece in order to discover its special treats.

The photographic work and digital prints placed on varying surfaces by Laurinda Faye Rubin processes the vibrant sensuality of the flora she captures as each work touches the eye with their visual fragrances. The abstract designs created in the mediums of paint and photography by James Chesnick www.carzwellco.com entreats the mind through their meandering shapes and textures whose bright vibrancy reflects the fullness of life. Although there were only three penciled prints (with two of them included in the raffle drawing) presented by Jeff Echevarria www.facebook.com/echevarria.art.studio, their mythical essence reached into the imagination of all who peered into the figure’s depths only to find a reflection of their own soul within the depiction’s eyes. The exquisite photographic pieces rendered by Kelly Ann Klee (aka Girl from Mars) offered memories that were held gently in their contrasting hues moving our thoughtful dreams through their ever present nostalgia. Ahhh.

As the art and the contemplative conversations it inspired filled the room, the time had come to hold the eagerly awaited Art Raffle which has become an iconic aspect of The Living Room Gallery’s Receptions. All of the artists featured in the exhibit had a number of their creative endeavors available as prizes for the event and all of them drew the tickets indicating who would win these pieces except for Jeff Echevarria who could not be in attendance as his immediate family experienced a profound sadness prior to the reception. A quietness touched the gathering as sympathetic wishes were silently expressed. Still, an exuberant excitement erupted as each winner of the work offered was revealed which celebrated not only the event and the confectioned holiday but life itself. The final prizes in the art raffle were given out and it was this point were concert tickets to those who found the Golden Tickets were awarded.

It was at this time did the gallery’s Directors and Curators, Keyaira Lynn Von Dred and Andrew Ozkenel, share some final sentiments of appreciations and farewells while inviting those who were still present to come to the next Artists’ Reception exploring the fantastical world of steam punk technology. The imaginations of those who learned the preliminary details of the exhibition and were familiar with the term were visibly impressed with the conceptual possibilities. You’ll be able to find more photographs taken during the June Artists’ Reception in The Living Room 2014 Gallery Part 3 at www.facebook.com/media/set/?set=a.10152343904050421.1073741890.636000420&type=1.

The Sherman Theater’s Living Room Gallery February exhibition featuring the work of Kelly Ann Klee (aka Girl from Mars), Laurinda Faye Rubin, James Chesnick, and Jeff Echevarria will be on display until June 30th. Their next exhibit which will be a group show inviting local artists to utilize a steam punk technology theme titled, “1850’s Carnivale.” The work can be presented in any medium and/or style the artist wished to explore. The Artists’ Reception will be held on Saturday July 5th beginning at 6pm and will continue to be on display until July 30th. Submissions of work will be accepted on Thursday July 3rd from 6 until 9pm. Please contact the gallery’s Directors and Curators, Keyaira Lynn Von Dred and Andrew Ozkenel, at 570-421-2808 for more information.

The Living Room is located on Main Street in Stroudsburg, PA next to The Sherman Theater who owns the building. The Living Room is a non-profit artspace and community hub featuring live music, performance, and other events in an intimate setting at affordable prices. Please Explore The Living Room Facebook Page at www.facebook.com/pages/The-Living-Room/123978921059378 for more information on The Living Room, all they have to offer, and how to be a part of it all.

In addition to their exhibitions, The Living Room presents a weekly Open Mic Nite which occurs every Sunday Evening beginning at 7pm. Musicians, Poets, Writers, and anyone who would like to share their talents with an eagerly accepting audience are welcomed to participate. There is occasionally a featured band or performer scheduled that enhances the enjoyment of the event. You can learn more about The Living Room Open Mic Nite Series on it’s Facebook Page at www.facebook.com/OpenMicAtTheLivingRoom?ref=ts&fref=ts.
Posted by Unknown at 2:08 PM