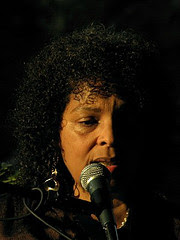 The Presbyterian Church of the Mountain in Delaware Water Gap, PA presented 3Spirit as part of their Summer gazebo Concert Series on Sunday July 10th. The Trio consisting of Nancy Reed, Vicky Doney, and Valerie Hawk provided the perfect music to accompany a lazy summer afternoon. Their renditions of the songs they performed were light, cheerful, and very smooth. Their performance provided a relaxed atmosphere which many who found themselves overwhelmed by the recent holidays embraced with a welcoming heart.

The individual members of 3Spirit have become well known throughout the Jazz community as soloist and part of a duo or a group. However, several years ago, they formed as a group to serve as back up vocals for Bob Dorough who dubbed them as “The Bobettes” and were enthusiastically received by the audience. This auspicious beginning inspired them to continue performing as a trio under the name, “Girl Talk.” Their performances were met with much acclaim which inspired them to change their group’s name once again. They became known as“3Spirit” and still are to this day.

Their present name is a very apt selection as their melodious voices and musical arrangements of the songs they perform entreats each listener to become more aware of the music their own spirit is playing for them throughout the symphony of their lives. It is through these symphonic movements we are able to bring our experiences to a measured beat in which we can more fully partake of all the wonders a harmonious life has to offer. The closed eyes seen among the crowd indicated an open heart which absorbed the gentle music emanating from the trio and will be carried with time for some time to come. You’ll find more photographs taken during the concert at The PCOM Summer Gazebo Concerts 2011 Gallery at www.facebook.com/forwardian.dude.

The next musical performance presented in their Summer Gazebo Concerts Series will be The Najwa Parkins Group on Sunday July 17th beginning at 6pm. The concert is free and open to the public. Please Explore The Presbyterian Church of the Mountain Website www.churchofthemountain.org call 570-476-0345 for more information about the concert and all they have to offer the community.
Posted by Unknown at 11:42 AM