Kari at The Sherman 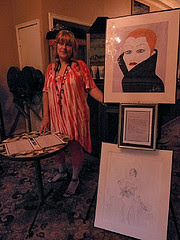 The Sherman Theatre in Stroudsburg, PA held an Artist’s Reception on Wednesday July 13th featuring the work of Kari Nespola. Even though there was a sparse attendance of the reception, those who were fortunate enough to discover the exhibit were treated to a varied display of intriguing images ranging from many filled with vibrant colors to others simply touching the canvas with their gentle renderings. The subjects found in the work were also varied as they ranged from a depiction of Sonic the Hedgehog from the Sega Genesis Video Games which delighted the heart as one is brought back to the time when such games were part of their adolescent experience to a piece whose simple lines merely hinted at a flower which entreated the viewer to go deeper into the work as if they were bees searching for its elusive nectar before experiencing the satisfaction drinking of it contains.

The later work I mentioned is indicative of the general mesmerizing effect of the entire collection. One can go to each piece to find oneself to be drawn into it without a realization of it until the experience comes to its profound conclusion. It’s as if the soul of each work calls out to the soul of the viewer and it’s Siren song brings the two together until they are indistinguishable from one another. In spite of our desires to remain with the piece we’ve embraced, the echoes of another neighboring work entreats us to explore its realms. And, with great yearning, we move on.

The music for the reception was provided by singer/songwriter Jeni Hackett who has become a favorite in the neighboring Cheeky Monkey Coffeehouse. The scarcity of a crowd did not lessen the joy and vibrancy recognized in her performance or in the songs she presented. In fact, her renditions of each composition were found to be contagious as many who were in attendance demonstrated their appreciation of the musical adventure by joining in with their voices and enthusiastically applauding after the final note had been played. This enhanced the atmosphere of the reception and you’ll find more photographs taken during the evening at The Visual Arts 2011 Gallery at www.facebook.com/forwardian.dude.

The exhibition will continue until August 20th and it can be seen throughout the Sherman Theater during their featured attractions as well as during their daily office hours. For those who would like to adorn their abode with the work, purchase information is available at the box office. The next event to be held at The Sherman Theater will be July 29th installment in their Severed Sinema featuring its first Miss Putrid Pageant along with the films “Carrie“ and The Blood Splattered Bride.” This will be followed by a performance by Kay Kay and His Weathered Underground on Thursday August 4th, a production of “The Music Man” on August 4th and 5th, The John Butler Trio on Saturday August 6th, Belladonna featuring Joey Belladonna of Anthrax on Saturday August 13th, Valencia Vas on Sunday August 14th, and Calling All Crows on Friday August 26th. Please Explore The Sherman Theatre Website at www.shermantheater.com for more information.
Posted by Unknown at 1:41 PM

Paul I am speachless by your review of my work. My humble and omni-present appreciation and thanks go out to you. Smoochies big time. ;-)> 'Kari'