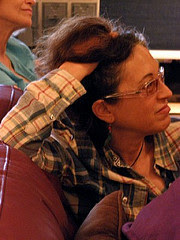 The Forwardian Arts Society hosted its monthly Film Lovers’ Gathering at The Cheeky Monkey Coffeehouse in Stroudsburg, PA on Friday July 15th. An impressive number of film lovers gathered to share the experience of watching the film and engaging in a conversation afterwards. The featured film for the evening was “Barney's Version” which is based on the novel written by Mordecai Richler. The film was directed by Richard J. Lewis and starred Paul Giamatti. The film was nominated for the Golden Lion at the 67th Venice International Film Festival in 2010.

As mentioned earlier, the film is based on the novel written by Mordecai Richler which relays the story of Barney Panofsky as an autobiography. It tells of his life through his own words until his death after suffering from Alzheimer's Disease. It is at this point his son edit’s the narrative and complete the “autobiography.” The novel relays Barney’s life through the varying mental states he experiences and may not reflect the reality of his actual life. But, whether they do or don’t is of little significance as the stories shared throughout to book are Barney’s version of events as the title suggests.

Although the novel is clearly meant to be presented as an “Autobiographical” piece, the film version isn’t so clear in this respect. It’s presented from multiple points of view and the audience witnesses events not experienced by the Barney Panofsky character. This is not to say “Barney’s Version” isn’t a good film. On the contrary, it’s very well made and acted deserving all the critical praise and nominations it has and may yet receive. It’s just interesting to note the variations between the novel and the film which is quite common in cinema. You’ll find more photographs taken during the gathering in The Forwardian Arts Society 2011 Gallery at www.facebook.com/forwardian.dude.

The Cheeky Monkey Coffeehouse offers a variety of coffee, drinks, and culinary treats along with events such as the one described in this article. The next Film Lovers Gathering held at The Cheeky Monkey is scheduled for Friday August 19th. Future events will include a Closing Reception designed to Celebrate the work of Laura Bee on Wednesday August 31st beginning at 6pm. The Exhibition continues until September 1st. This will be followed by an Artist’s Reception on Friday September 2nd featuring the work of Kim Pollard beginning at 6pm as part of their Espresso Yourself Art Shows Series. This Exhibition continues until November 1st. Ongoing events at The Cheeky Monkey include their Tuesday evening Open Mic Nites and their “Spoken Word Symposium” on Thursday evenings. Please Explore The Cheeky Monkey Coffeehouse Website at www.cheekymonkeycoffee.com or call 570-420-8222 for more information.