A Light Black Night of ArtMusic 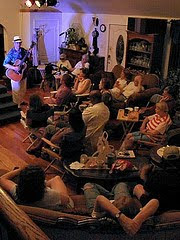 The ArtMusic Coffeehouse in East Stroudsburg, PA presented Marc Black on Saturday July 23rd. After an improvisational interlude of music provided by the concert’s host Don Slepian created a translucent atmosphere, Marc Black took the stage to greet the full capacity audience with his joyous style and light hearted demeanor. Those who attended the concert were treated to a delightful mix of original songs along with those very familiar to all. This added to the wonderful congenial environment created by the Slepians whose warm hospitality and peaceful countenance allows everyone to feel as if they were entering their own home.

His original songs included the titled track from his award winning “American Children” CD which he collaborated with Richie Havens and “No Fracking Way” which is a song written to create awareness about the dangers inherent in the hydro-fracking process gas and oil companies use to extract more petroleum products from the ground. His cover pieces included such classics as “The Boxer” by Paul Simon of the Simon and Garfunkel Folk Duo and #“Wooly Bully” written by Domingo "Sam" Samudio of Sam the Sham and the Pharaohs. While the majority of the songs performed brought a smile to the face and a tap to the toes, many others brought a thought to the heart which could be seen in the gestures and the eyes of those who contemplated them. You’ll be able to see Photographs taken during the concert in The ArtMusic Coffeehouse 2011 Gallery at www.facebook.com/forwardian.dude.

Marc Black is well known for utilizing his music to deal with social and spiritual challenges and has won numerous song writing competition. He was also a featured performer at the Sundance Film Festival and his Youtube videos have been viewed as many as 35,000 times. His most recent full CD is titled, “Stroke of Genius” and features the talents of Art Garfunkel and John Sebastian and many others including himself. You’ll be able to learn more about Marc Black, his music, his upcoming concerts and more by exploring his Website at www.marcblack.com.

The ArtMusic Coffeehouse is held in the home of Don Slepian and Jan Julia who reside in the borough of East Stroudsburg, PA as part of the Concerts In Your Home Series. A variety of musical forms are presented including folk, jazz, classical, and electronic music. Although the concerts welcomes all who wish to attend, seating is limited as it they take place in a private home. The Next The ArtMusic Coffeehouse Concerts will feature Jesse Terry on Saturday August 20th and "Mean Mary" James on Sunday September 11th both beginning at 8pm. Please Explore The ArtMusic Coffeehouse Website at www.ArtMusicCoffeehouse.com or Call 570-476-6307 for more information and to reserve your seats.
Posted by Unknown at 1:42 PM