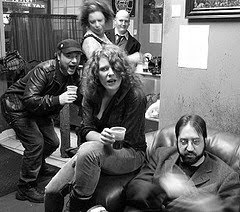 The Dreamland Creations in Stroudsburg, PA held an Artists Reception on Sunday February 6th which featured the work of numerous artists for their exhibition titled, “The Lyrics Show.” This was the first of themed exhibitions for 2011 which were made popular during 2010. It provides artists with opportunities to explore their creative imaginations as they are encouraged to devise their own interpretation to what the particular theme means to them and how it should be envisioned. This never fails to lead to an array of styles and approaches to the theme which enhances the experience for those who attend the exhibition as well.

The work presented during “The Lyric Show” exhibition proved to be no exception to this trend as the caliber of the pieces were of a very high standard as was the conversation it all inspired. An extra added enhancement to the exhibition was the posting of the lyrics of the songs that inspired the visual work. While many were of favorite songs recorded by musicians well known to the artists’, there were a number of pieces accompanied by lyrics of songs written my the artist him/herself. This showcased the considerable talent of the artists in question as it provided further depth into the entire work in which the can delved into by those who experience the work. However, regardless whether the lyrics accompanying individual pieces originated from the presenting artists’ or not, the presence of the word along side the art added a new dimension waiting to be explored by anyone who chose to embark on such a journey.

The receptions during 2010 often included musicians who were scheduled to perform prior to the event. However, since the exhibition’s theme related to the lyrics of songs, it was fitting the event would extend an open to musicians to share their songs with the gathering. This lack of planning allowed an arrival of music as varied and interesting as the work presented upon the walls. It was entertaining, intriguing, and mesmerizing as each note was played and sung. These musical artists included Eric J. Becker on Guitar, Holly Avila on Guitar accompanied by Ralph on Accordion and Michael S. Cooke on percussion, Ricky Antonio Delgado on Guitar, Stephan Tsapatoris on Guitar accompanied by Holly Avila on percussion, and Dmitry Kaif on Guitar.

The Dreamland Creations in Stroudsburg, PA serves as a studio where individuals can adorn their forms with a variety of body art such as tattoos and piercing reaching out to the vast community of conventional and non mainstream artists throughout the area. Their next Artists’ Reception will feature numerous artists who will present their work for an exhibition titled, “The Elements Show.” The reception will take place Sunday April 3rd beginning at 4pm. The Exhibition will continue until May 30th. Please Explore The Dreamland Creations Website at www.myspace.com/dreamlandcreations or call 570-421-6313 for more information about the artists, the current and future exhibitions, and all they have to offer.
Posted by Unknown at 12:32 PM