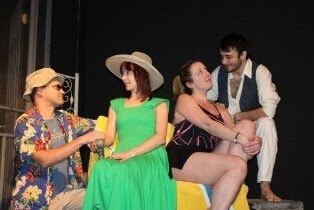 The Shawnee Playhouse in Shawnee on the Delaware, PA presented The Worthington Players production of “Spanakopita” by Larry Rosler who won the full length play category of their 2010 Playwright Completion. This Annual Competition not only gives local playwrights an opportunity to have their work presented on The Shawnee Playhouse stage but also gives the audiences who frequent the venue a chance to experience some new and interesting work. This production of “Spanakopita” proved to be no exception to this tradition as the audience was treated to a very entertaining experience at the theatre.

The play’s title “Spanakopita” derives from a Greek dessert consisting of chopped spinach and a variety of cheeses along with other ingredients which are combined and wrapped in a pastry. The name of the dish could be translated from the Greek to “spinach pie” in English. A full listing of the ingredients made the dish sound delicious and a danger to any weight loss determinations. However, viewing the play allows one to experience the ecstasy of what can be found while consuming the pastry without the need to run a few extra laps at the gym.

The play takes place on an Island Villa off the Greek coast in which an older couple named “Richard” as portrayed by Glenn Geyser Getz and “Diane” as portrayed by Juliet Dunham are spending their vacation with Diane’s friend “Zoe” as portrayed by Nicole Dietz. While Diane wants to go out to explore and experience all things Grecian, Richard would rather just sit and read. In the meantime, the recently divorced Zoe is having adventures of her own which includes meeting a young Greek man named Andreas as portrayed by Patrick Murphy whom she describes as a god.

The relationship between the characters becomes amusingly complicated when Richard (who has always disliked Zoe) feels he has fallen in love with her. Except for a moment of intoxicated indiscretion, the feeling is not reciprocated. The relationships experience further complications when the sexual opportunist Andreas begins seducing Diane. This seduction is appreciated. The plot of this well written and acted play leads its characters toward revelations about themselves and the relationships they’ve chosen while the audience laughs at their genuinely funny antics. In other words, it was fun play.

The Worthington Players production of “Spanakopita” by Larry Rosler was directed by Byrdie Jacques and Sara Ferguson and Stage Managed by Lydia Sampson. The Lighting and Sound Technician was Robert Kobus. All of the productions presented at The Shawnee Playhouse are produced by Ginny and Charlie Kirkwood. The Executive of The Shawnee Playhouse is Midge McClosky while its group sales manager is Mary Horn. The Box Office Staff includes Chrissy McMannus and Ariel Hudak. Becky Haskell serves as the playhouse’s Sales and Marketing Director.

The Worthington Players production of “Spanakopita” by Larry Rosler continues its run until February 20th. This reviewer would recommend seeing this romantic comedy even if some of those reading this review don‘t particularly like the Rom-Com genre. By admission, this reviewer often finds plays and films of this genre somewhat lacking because many create unbelievable characters doing unbelievable things in unbelievable locations. However, while “Spanakopita” does contain some of the typical Rom-Com elements, it involves the audience with the characters’ lives in such a way they become not only our friends but we begin to see ourselves within them. This has much to do with the talent of the actors, the theatrical abilities of the directors, and the considerable writing skills of the playwright. And, besides, it’s fun.

The Worthington Players Annual Playwright Completion invites local playwrights to send in their original works in which a panel selects a number of finalist from the submissions. The chosen plays are then presented in a series of staged readings which are viewed by an audience. The audiences vote on which plays are to be presented as full productions and those who receive the most votes become one.

Finalist for this year’s competition include “Mark Twain and Livy” by Joseph P. Ritz, “Bill Wilson’s Bicycle” by Peter S Nicholls, A Cabin for a King” by Sarah McCarroll and Julie Luongo, “Visions of Joanna” by Ken White, “The Queens Are Coming” by Salome Kingsly, “The Last Word” by Thomas Hudak, “Four Strangers and a Wedding” by Thomas Hudak, “The Last Drive-In” by Thomas Hudak, “Polar Bares” by Thomas Hudak. “The Emperor’s New Clothes” by Stephen A. Williams, and “Silence Not” by Cynthia L. Cooper. The Staged Readings for these finalist will take place March 4th, 11th, and 18th at 8pm. Please contact The Shawnee Playhouse to learn more about the readings and how you can participate in the 2012 competition.

Future presentations at The Shawnee Playhouse will include their productions of “Broadway on the Red Carpet” February 25th - 27th and “Branigan’s Blarney” by Rod Foote March 4th - 20th, The Worthington Players production of “The Skyscraper” by David Auburn March 25th - April 3rd, The Prestige Productions presentation of “Love, Sex, and The I. R. S.” by William Van Zant and Jane Milmore April 8th - 17th, and The Center Stage Players production of “Love Letters” by A. R. Gurney April 22nd - May 1st.

Photograph provided by The Shawnee Playhouse.
Posted by Unknown at 1:04 PM

I have a message for the webmaster/admin here at forwardianartssociety.blogspot.com.

Can I use part of the information from this blog post right above if I provide a link back to this website?

Yes you may. Just credit the source as www.theforwardianartssociety.com.