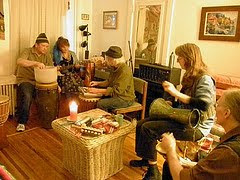 Holly's Wholistic Haven in East Stroudsburg, PA held a drumming session on Saturday January 29th to celebrate the arrival of the new moon and Candlemas. The evening was hosted by Holly Avilla began with a potluck dinner served in her kitchen while those attending had an opportunity to share some great food and even greater conversation. As the shadows of the new moon amplified the darkness outside the Haven, it’s luminary aspects shown throughout the drumming session that followed the meal was enhanced as each avenue of music was inspired by the celestial occurrence and the influential beats of each other. These instruments of the heavens and souls who occupy them included Holly, Seth Lewis, Michael Allcock, Peter Taney, Caroline Burgage, and Arline M, Smeltz.

The evening also served as a celebration of Candlemas which is one of the twelve Great Feasts in the Eastern Orthodox Church. It serves as a remembrance of the Presentation of Jesus at the Temple in which (according to the Gospel according to Luke) the parents of Jesus took their baby to the temple 40 days after his birth to complete Mary's ritual purification after childbirth, and to perform the redemption of the firstborn, in obedience to the Law of Moses. They encounter Simeon the Righteous who has been promised that "he should not see death before he had seen the Lord's Christ." They also encounter an elderly prophetess named Anna offered prayers and praises to God for Jesus while speaking of his role in the redemption of Israel.

However, it’s widely believed by those who practice what’s become known as the Pagan Faiths, Candlemas is a Christianization of the Gaelic festival of Imbolc (aka St Brigid’s Day) which was celebrated in pre-Christian Europe marking the beginning of spring. Regardless of the origin of the holiday, the warmth shared among those who visited the Haven brought forth a Spring like season through their good will. It was a wonderful thing to experience and I’m eagerly awaiting the next opportunity to partake of it again. You’ll find more photographs in the Music 2011 Gallery at www.facebook.com/forwardian.dude.

In addition to gatherings such as the one described in this article, Holly's Wholistic Haven offers astrology and tarot consultations which specialize in relationship and soul mate astrology. Please Contact Holly's Wholistic Haven at 570-369-2797 for more information about these and other services along with future special events.
Posted by Unknown at 3:06 PM