A Melodious Duo Fills a House 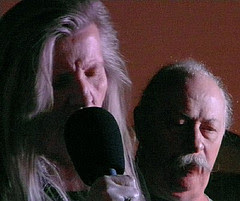 The ArtMusic Coffeehouse in East Stroudsburg, PA presented The SheilaMark Duo on Friday February 25th. Although the gathering was rather small due to the still wintry weather conditions, the music presented by Sheila and Mark Hamza filled the home of Don Slepian and Jan Julia enhancing it’s welcoming and calming effects on all who come to visit their abode. The concert consisted of Mark playing his accordion while Sheila sang songs which touched the heart and brought smiles to the faces of all who partook of their reminiscent qualities.

The SheilaMark Duo performs in a variety of venues and can be seen almost anywhere throughout the area at any given time. Besides begin a part of the duo, Sheila has played with a number of Celtic bands and has performed in numerous festivals. She recently publish a CD titled, "Celtic Lady of the Lake." Mark and his accordion is often seen (among other places) roaming around The Annual Delaware Water Gap, PA Celebration of the Arts (COTA) Jazz and Arts Festival which takes place in September. He can also be seen playing his huge Hammond Organ with his fellow musicians of The Great Swamp Blues Band in several locations. Please feel free to explore The SheilaMark Duo website at www.sheilamarkproductions.com to learn more information about them, their music, and where you might catch their next solo and collaborative performances.

Along with the wonderful music, the evening also included an opportunity to enjoy some delightful conversation and some delicious culinary treats. A peaceful and welcoming environment never fails to engulf those who come visit the house which many has come to feel at home. The ArtMusic Coffeehouse is not only a place one can go to hear some great music; it is also a place one can experience love. You’ll find more Photographs taken during the concert in The ArtMusic Coffeehouse 2011 Gallery at www.facebook.com/forwardian.dude.

The ArtMusic Coffeehouse holds its concert series in the home of Don Slepian and Jan Julia who reside in the borough of East Stroudsburg, PA. A variety of musical forms are presented including folk, jazz, classical, and electronic music. Although the concerts welcomes all who wish to attend, seating is limited as it they take place in a private home. The Next The ArtMusic Coffeehouse Concert will feature Ann and Will Rowland on Monday March 7th beginning at 8pm. Please Explore The ArtMusic Coffeehouse Website at www.ArtMusicCoffeehouse.com or Call 570-476-6307 for more information and to reserve your seat.
Posted by Unknown at 1:11 PM

Thanks for coming to the concert. Mark and I appreciate everything that you have done for the arts and for us. It was great to see you and I would like to show our appreciation to Don Slepian and Jan Julia for the opportunity. Thanks again everyone.