A Centennial in the Park 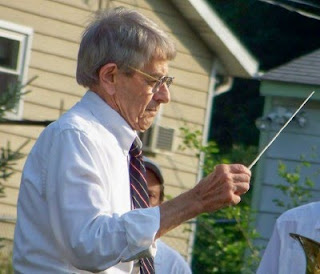 The Stroud Township Municipal Center in Stroudsburg, PA presented their first Gazebo Concert for the 2010 season on Sunday June 27th in the township’s Jay Albertson Park. Although they weren’t really on the park’s gazebo due to their size, The Trinity Centennial Band under the direction of Ralph S. Harrison played a variety of tunes ranging from military marches and light classics to selections from Broadway and the Big Band Era much to the delight of the many toe tapping citizens of the area who thoroughly enjoyed listening to the 55 piece ensemble consisting of local musicians whose love for music shown through every measure of their performance.

Many of those who attended the concert were mindful of the exceptionally warm Summer Day. But the music moved quickly as a cooling breeze whose presence was missed when it came to its conclusion. Many wanted the gentle feeling the musicians created to linger but were soon consoled to holding the membranes of their experiences close to their beings. You’ll find more photographs of the concert in The Forwardian Arts Society Music 2010 Gallery at www.myspace.com/forwardian_arts.

The Stroud Township Municipal Center presents a series of concerts throughout the Summer the fourth Sunday of the Month. Their next Summer Gazebo Concert in the Jay Albertson Park will feature Riverside Rhythm on Sunday July 18th beginning at 6pm with a nine piece swing band performing music from the Big Band Era. Please Explore The Stroud Township Municipal Center Website at www.township.stroud.pa.us or call 570-421-3362 for more information.
Posted by Unknown at 10:27 PM