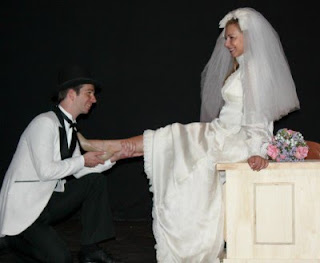 The Shawnee Playhouse in Shawnee on the Delaware, PA is currently presenting their production of “I Do! I Do!” by Tom Jones and based on the Jan de Hartog play titled, “The Fourposter” as a large fourposter bed in the center of the bedroom dominates the set. This is also true of this production of “I Do! I Do!” as the bed appearing on stage does draw a great deal of attention to those coming into the theater to experience the play.

Like the play “The Fourposter,” “I Do! I Do!” is about a married couple named Agnes (portrayed by Megan Rucidlo) and Michael (portrayed by Patrick McLaughlin) Snow who begins their marriage in 1895 and continues it until the play ends in 1945. Their 50 years together is strewn together by numerous songs and scenes familiar to many who have been in a long term relationship. It is all enjoyable to watch.

However, if one comes to the play expecting an in depth look of what being in a long term marriage is like, one may leave the theater a bit disappointed. The construction of the play forbids it as it is meant to be a light hearted musical inspiring very little reflection on any societal or interpersonal implications. In other words, it’s a fun play to watch if one isn’t looking for too much depth.

This is even true during a scene when an extra marital affair is revealed. This could be very devastating to a marriage but the play creates an expectation everything will be ok. Even when the couple tell each other to “Go to Hell” it’s said with such politeness the audience doubts the sincerity of their statement. This reviewer doubts such word would lack any sincerity in a 40 to 50 year relationship. After all, this reviewer has been in “relationships” lasting for one month where such words were spoken in such ferocity it contributed to their demise. Still, this is a good play to see and worth the price of admission for those seeking something light and filled with some very good songs.

The Shawnee Playhouse production of “I Do! I Do” whose Book and Lyrics were written by Tom Jones with Music by Harvey Schmidt and directed by Midge McClosky who also serves as the playhouse‘s Executive Manager. The play was Staged Managed by Byrdie Jacques while Scot Cleaveland served as the Production’s Set Designer and Technical Director as assisted by Eric Dwyer who also served as Light Designer. The Master Carpenter and Light Technician was Stephen Sury while August Massengill served as Sound Technician. The Production’s Music Director was Amy Rau with Kyle Donahue on Keyboards while the production was Choreographed by Christine Mase. Missy Benefield served the production as its costumer with Stephanie Clare and Marshall Haskell as Dressers. The Shawnee Playhouse producers are Ginny and Charlie Kirkwood while group Box Office Sales of their productions are handled by Mary Horn as assisted by Becky Haskell. Amy Cramer serves as The Shawnee Playhouse’s Publicist.

Photograph provided by www.theshawneeplayhouse.com.
Posted by Unknown at 2:11 PM