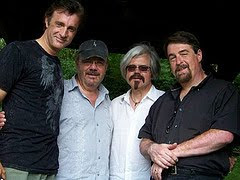 The Presbyterian Church of The Mountain (PCOM) in Delaware Water Gap, PA presented The Eric Mintel Quartet (EMQ) on Sunday June 20th as part of their Summer Gazebo Concert Series. A warm Summer day greeted the crowd of jazz lovers as they gathered together upon the lawn in front of the Gazebo to experience the smooth instrumental jazz pianist Eric Mintel and the co patriots in the form shared with them. These co patriots included Dave Antonow on Bass, Nelson Hill on Saxophone and Flute, and Dave Mohn on Drums.

Together, the quartet blended their instruments into an elixir of sound containing many restorative qualities which was enhanced by its relaxing effects. The majority of their performance consisted of compositions found on their recent CDs titled, “Ground Breaker” and “50 Years After….A Tribute to Dave Brubeck.” I was fortunate enough of obtain a copy of “Ground Breaker” to listen to on the ride home. It made me wish I lived further away as it was fantastic music to travel with.

However, I found it equally as enjoyable when I listened to the remainder of the CD while sitting in my living room. You’ll be able to learn more about EMQ including performance schedules and how to obtain copies of their CDs at www.ericmintelquartet.com. Part of the enjoyment of listening to the CD was derived from the memory of the concert at PCOM. You’ll find more photographs taken during the concert in The Forwardian Arts Society PCOM Gazebo Concerts 2010 Gallery at www.myspace.com/forwardian_arts.

The Presbyterian Church of the Mountain (PMOC) holds their weekly concert at their Gazebo every Sunday from 6pm until 7:30pm running from the months of June until August. They are free and open to the public with concessions available for purchase. When it rains (or rain is expected), the concert moves inside the church itself. Their next installment of their Gazebo Concert Series will be The Jazz Artist Reparatory Orchestra (JARO) featuring some Big Band Sounds on Sunday June 27th. Please Explore The Presbyterian Church of the Mountain Website at www.churchofthemountain.org or call 570-476-0345 for more information.
Posted by Unknown at 1:00 PM