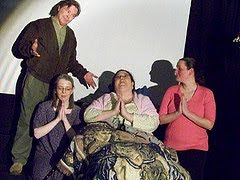 The Pocono Community Theater in East Stroudsburg, PA hosted The Star Gazer Productions presentation of the play entitled, “Lovers, Winners, Losers” written by Brian Friel on Sunday February 21st. This was the first live theatrical production presented at the theater which has become known for its introduction of Independent and Foreign Films not commonly shown in larger movie venues. It is hoped The Pocono Community Theater will present more live theatrical productions in the future.

The play “Lovers, Winners, Losers” by Brian Friel is actually two plays weaving a set of comedies which are equally entertaining. The first is about a couple (portrayed by Smeraldo and Kevin Holbert) who fall in love on a hill in Ireland. Their frolicking romance begins to turn sour as she becomes pregnant and he focuses his attentions to his studies. Like a popular song has said, They “Lost that Lovin’ Feeling.” But, unlike the song, the frivolity that attracted the couple towards one another returns from time to time and it is seen during the final moments of the piece.

This brought a smile to each member of the audience’s face, but (at the risk of sounding a bit cynical) since we’ve seen the couple go through sullen and joyful times together, one wonders how long this joyous mood will continue. But then, one soon realizes all of life is filled with sullen and joyous moments otherwise life would have little meaning. It is joy that allows us to dance to the celebratory tune of living while our sober times helps us to connect with our deeper richer feelings whose absence would make life a bit hollow.

The second play was about a man (portrayed by Robert Taylor) whose wife (portrayed by Rebecca Koval) is caring for her “invalid” mother (portrayed by Pamela Kelley). The play centers around the man’s frustration which accompanies not seeing his wife. Although they have a home of their own, she is living with he mother in order to care for her every need. Even when he comes to visit and they are about to engage in some marital intimacy, the mother rings an interrupting bell (tonal interuptus?) demanding her daughter stops what they’re doing in order to attend her.

The play comes to a climax (no pun intended) when the man decides to enter the inner sanctum of the mothers room while intoxicated. Unfortunately, if the desired results would have been the mother kicking both him and his wife out so they can go home, this did not happen. Instead, not only is the mother and her friend (portrayed by Jennifer Smeraldo) angry at him, so is his wife. It seems this guy can’t win from losing. But, eventually a peaceful coexistence develops and everyone winds up pretty much where they started at the beginning of the play.

The only unfortunate thing to say about these plays is they were only shown for one night. They are amusing pieces with enough pathos to enhance them. It’s like making a simple soup from a recipe handed down through generations and adding just a pinch of something to tweak it a bit. All in all, these were very enjoyable pieces to watch and the acting in them was very good. You’ll find more Photographs in The Forwardian Arts Society Pocono Community Theater 2010 Gallery at www.myspace.com/forwardian_arts.

The Websites mentioned in this review are The Pocono Community Theater at www.poconocommunitytheater.org. Robert Taylor of The Robert Taylor Foundation at www.robbtaylor.com/foundation, The Forwardian Arts Society at www.theforwardianartssociety.com, and The Black Maria Film Festival www.blackmariafilmfestival.org
Posted by Unknown at 2:26 PM