Theatrical Review: Love In a Time of War 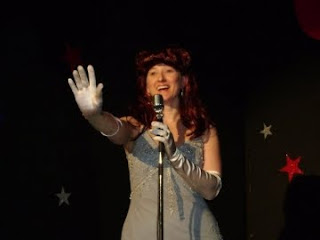 The Shawnee Playhouse in Shawnee on the Delaware, PA presented The Worthington Players production of “Love In a Time of War” by Catherine Ladnier and Paul Janensch. The play is based upon letters Eva Lee Brown of Easley, SC received from servicemen and others during World War II. These letters were discovered by her daughter (the play’s co-author Catherine Ladnier) 50 years after they were written and they provide most of the text of the production. The play serves as a tribute to those who participated in that war which defined the era and the generation who lived it.

These letters shared the stories of those who wrote them. Some were from servicemen who shared the excitement of being a part of history while others expressed their regrets of leaving their loved ones behind mingled with the realistic fears they may never see them again. Throughout the production, this reviewer began to notice how the authors of these letters seemed like ghost from another realm. It made me wonder if our memories are but ghostly apparitions of another time which does not exist in this world except in our thoughts. This observation may be a complete digression from the theme and focus of the play, but the thought inspired by its presentation enhanced this reviewer’s enjoyment of it.

The Worthington Players production of “Love In a Time of War” by Catherine Ladnier and Paul Janensch and directed by Brydie Jacques with Lighting Technician Emily Cioc and Sound Technician Kyle Mahaney. The producers are Ginny and Charlie Kirkwood. Group Sales of their productions are handled by Mary Horn (who also served as a member of the Box Office Staff) as assisted by Becky Haskell.

This production of “Love In a Time of War” by Catherine Ladnier and Paul Janensch continues its run at The Shawnee Playhouse in Shawnee on the Delaware, PA until February 21st. It was extended from its earlier scheduled run apparently due to the recent inclement weather conditions common throughout the area. Although this extended run is almost at an end, I would encourage many who would like to honor the veterans in their lives to see this play while it‘s still available. It is well performed and staged which makes it well worth seeing. The next Shawnee Playhouse presentations will be The Shawnee Playhouse Annual Staged Readings February 26th - 28th featuring the finalist of their 2011 Original Playwrights Contest. The audience will have the opportunity to choose the play they enjoyed the most and that play will become a full production presented in January 2011.

Photograph provided by The Shawnee Playhouse and depicts Midge McClosky in “Love In a Time of War.”
Posted by Unknown at 2:14 PM