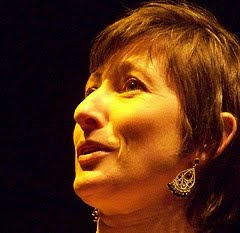 The Shawnee Playhouse in Shawnee on Delaware, PA presented their Annual Series of Staged Readings February 27th and 28th featuring presentations of plays chosen to be the finalist of The Shawnee Playhouse 2011 Original Playwright Contest. Those reading the works while seated were Travis Southard, Kevin Hillman, Mark Lichty, Nance Brown, Mark Pender, Kim Moldovan, and Midge McClosky who served the event as it’s emcee and the Playhouse as its General Manager. The plays were varied in style and topics and members of the audience were given an opportunity to select their favorite play. The play generating the most interest will become a full production at The Shawnee Playhouse in January 2011.

The plays read on Saturday February 27th at 2pm were “Mandarin Dinner For One” by John E. McGuigan, “Orpheus” by Paul Adam Smeltz (Yeah, that’s me), “Occasional Versus” by Robert Grogan, “A Night in the Toll Booth/Pyscho Soccer Mom” by Tom Hudak, “Whimsical Grimm” by Stephen A. Williams. The plays read later that day at 8pm were “Keeping My Voice Down” by Craig Czury, “Tolstoi in Trepidation” by Maureen Bunns Shannon, and “Spanakopita” by Larry Rosler. On Sunday February 28th at 2pm the plays to be presented are “Light From Us would Set the Sun on Fire” by Craig Czury, “On Innocent Ears Befallen” by Jonathon Davies, “Ethereal Killers” by Zanne Hall, “The Scranton Poem Opera” by Craig Czury, and “Ukelele Land” by Uke Jackson. I was only able to attend the Saturday 2pm performance.

However, if my experience that afternoon was any indication how the remainder of the series went, I would say it was a great time to be in the theatre. It was wonderful being able to hear new and exciting works written for the stage while imagining in your mind’s eye what they would look like upon the stage in a full production. This exploration into our imaginations were enhanced by the opportunity to actually selecting a play that will become a full production in the future. It was like being a producer with plays being in audition.

I was pleased to have my play, “Orpheus,” included among them. From a playwright’s perspective, it was good to be able to hear my work. Every writer knows the act of writing is a solitary one with certain limitations. You can read your work over and over, you can mouth the words to your self, or you can email it to friends to see what they think. But, until you actually hear someone else read the words, you never really know the language of the piece you’re writing. How does it sound? Is there a natural flow in the dialogue? Are the themes germane to the work being communicated? All these questions and more can be answered by hearing the work thus enabling us writers to modify, enhance, or discard aspects of it.

Although I had hoped to win the competition, I mainly wanted to hear how my play sounded so I could determine whether it needed more work. Well, I heard it and it does. I’ve discovered some inconsistencies and repetitions I had no idea existed from just reading the material silently to myself. I have come to believe quite some time ago it is bad form to vote for yourself in this type of competition. I voted for another play but not merely because if was in good form to do so. I felt the play was much better written than my play as it presently is and would be a much better production. It was very amusing and I’m still thinking of the funny lines it contained.

As I’ve mentioned, I only attended one of the three presentations and I haven’t seen all of the plays to be selected. So, I won’t reveal the play I voted because, if another play is selected, it might indicate the audience didn’t chose the best of the plays presented. This may be a slightly egotistical presumption on my part as it may not matter if I reveal who I vote for or not. But, just in case it does matter in some parallel universe….

The final series of plays to be presented in a Staged Reading will be 2pm today. It may be already too late for many of those reading this to attend. I’m sorry this did not get to you sooner as it was a very good experience for those who love the theatre and would like to catch a glimpse in the theatrical process. You’ll find more photographs in The Forwardian Arts Society Theatre 2010 Gallery at www.myspace.com/forwardian_arts.

The next Shawnee Playhouse presentations will be “A Wee Bit O’ The Irish” by Rod Foote March 5th - 14th, “The Importance of Being Ernest” by Oscar Wilde March 27th - April 11th, and The Center Stage Players’ production of “Fuddy Meers” by David Lindsay-Abaire April 30th - May 9th.

Websites and email addresses of those mentioned in this article are The Shawnee Playhouse at www.theshawneeplayhouse.com and The Center Stage Players at centerstageplayers@yahoo.com.
Posted by Unknown at 1:24 PM