Partying the Block Away 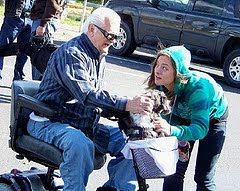 The Eastburg (East Stroudsburg) Community Alliance* held a Block Party on Crystal Street on Sunday October 11th. Although it had a modest attendance, it was a really fun day for everyone who did come out. The Forwardian Arts Society and Pocono Jazz and Poetry* helped supply (along with Erik Knoll* of EA Knoll* Productions) some of the Music and Poetry performed throughout the day which proved to be as varied as the food and other festivities including a wandering musician and a costume fashion show featuring the kids who came to enjoy the party.

In spite of the small area Crystal Street covers, there were three areas for music to be performed. One was by The Gorman Chiropractic Life Center* area who were offering free adjustments throughout the day, one was by The Dansburry Depot with music presented throughout the day by a DJ playing a variety of songs made popular during the 60s, 70s, and 80s, and one was by The Liztech Gallery* provided by The Sherman Theater* and was considered the main stage. It was quite impressive how the sounds coming from these areas did not overlap or interfere with the performance taking place elsewhere. Some interesting acoustics could be why, but it may be largely due to the respect the performers had for one another coupled with their desire to make sure everyone who came enjoyed whatever experience they chose to partake of.

The music began at The Gorman Chiropractic Life Center* area with Ron Gorman* who sand and played his guitar. This simple presentation was a good start to a day rich in a home town flavor. It seemed to set the tone for most of what transpired.

The performances on the main stage began with Ear Ecstasy* who performed an acoustic set as they are well known for their harder stylings of music. I have noticed how interesting some bands known for one genre of music (such as Hard-Core, Scream-o, and Heavy Metal) are capable of adjusting the arrangements of their songs to compliment whatever venue they find themselves performing in. While many bands admirably choose to remain in the style they have chosen for their band, this flexibility allows the musicians to explore the depth of their talents gaining new fans and supporters wherever they go. I am please to see Ear Ecstasy* as one of these bands. In fact, they were later seen at The Gorman Chiropractic Life Center* area and continued to match their music to the setting.

The second performer on the Main Stage was Randy Bigness* and his band. The bluesy tunes echoed throughout the soul of everyone who stood before the stage. Although the songs were mostly covers, he made them all his own. Randy Bigness* has performed in a variety of venues and audiences with large numbers as well as those who consists of small gathering. Regardless of the venue or the number of people who attend, he belts his music out and everyone is the better for it.

Randy* was followed by Eric Becker*. Eric is widely known for the Open Mic Nights he hosts at The Starbucks Coffeehouse every Sunday evening beginning at 6:30pm. Not only does he help those with considerable music talent to share their skills with an appreciative audience, but his unique talents compliment the event encouraging everyone with music related abilities to develop them. His performance on the main stage was reminiscent of the Open Mic event as familiar songs met a new audience. Yet, those who have attended the Open Mics, embraced the music as one would embrace an long time friend.

Keith Leslie Haynes* of The Business Fairy* followed Eric onto the Main Stage providing some new material to his musical repertoire. He is another denizen of the Sunday Open Mic Nights at Starbucks whose quick and energetic movements on his guitar has become legendary. Much of the same energies were unleashed during his performance amazing those who do not frequent the coffeehouse.

He was followed by the poetry of Urban Mountain Voices* founded and mentored by Tricia McGarvin* which is an organization giving a voice to poets consisting of talented young people in all economic and social situations ranging from those in school and those who are not, those who are from loving families and those who suffer dysfunctional abuse, and those who live at home and those who have none. The poetry presented ranged from experiences in an abusive home to the loss of a friend, in an automobile accident, to racial bigotry, to discovering a kiss making the search for another “Game Over.” Tricia* also presented some of her poetic “spits” which not only echoed the talent embodied by her charges but demonstrated her passion to have their words come forth as their experience are not so very different than her own.

Once the external sounds of the poetry concluded, an East Stroudsburg University* group who seeks to enhance awareness of the devastating effects of drug and alcohol use known RISK presented a costume fashion show for the kids. Prizes were handed out and a great time was had by all. It was fun watching the children show off their costume and get into the characters the wardrobe inspired. In other words, they were cute.

The music continued with a solo performance by Eric Hanston* who is part of a group called, “Dewey Decimal and the System.” He is also known as the general manager of The Pocono Community Theater whose screenings of independent and foreign films are seldom done in larger commercial venues. The slow, sad renderings consisting much of his material communicated soul to soul. He was followed by another member of The Pocono Community Theater staff, Alicia Johnson*, whose own compositions were equal (f not surpassed) to the quality of the covers she performed. Her performance ended the day which left those who were there eager to experience it all again next year.

Other happenings at the Crystal Street Block Party not already mentioned in this article included exhibits by The Sherman Theater*, The Stroud Region Open Spaces and Recreation (SROSRC)*, and The Pocono Community Theater*. There was also a farmers’ market comprising of all kinds of fresh fruits and vegetables. Magician Michael St. James* was roaming around the Block Party creating many illusions to entertain the minds of all who wished to be mystified.

Michael St. James* will be seen at The Pocono Community Theater* on Saturday October 17th as part of their "A Toast to the Ghosts" event. The Next event for The Eastburg Community Alliance* will include Scarecrow Building along with the arrival of the Steamtown Excursion Train on Saturday October 17th, The Annual Unity Tree Lighting Ceremony at Miller Park in December, and The Books, Brushes, Blooms featuring local Writers, Visual Artists, Florists, and Gardeners at Miller Park in May. Please Contact The Eastburg Community Alliance* at 570-424-7540 for more information.

(*) denotes members of The Forwardian Arts Society in good standing and are considered Our Good Friends.
Posted by Unknown at 1:25 PM