Halloween Hell Night at The Sherman 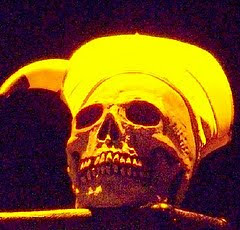 The Sherman Theatre* in Stroudsburg, PA presented another installment in their Severed Sinema* Series on Friday October 16th hosted by Earl Kessler*. The films shown were the horror classics “The Exorcist” (1973) and “Phantasm” (1979) along with a midnight screening of “Night of the Living Dead: Reanimated” (2009) which is an animated version of the 1968 classic horror film. In addition to the films, there were musical performances by Rooster Baby and Nu Prosta Kief*.

“Phantasm” was, as most low-budget films are, directed, written, photographed, co-produced and edited by Don Coscarelli featuring the film’s iconic character known as The Tall Man (portrayed by Angus Scrimm) The film is about a 13 year old named Mike Pearson (portrayed by A. Michael Baldwin) who is being raised by his 24 year old musician Jody Pearson (portrayed by Bill Thornbury) after the death of their parents. While (for reasons unknown) spying on a funeral procession at the burial site, Mike notices the undertaker (The Tall Man) picking up the coffin with seemingly supernatural strength and placing it back into the hearse. He begins to investigate this odd occurrence later involving his brother and his friend Reggie as portrayed by (Reggie Bannister). They soon discover The Tall Man is turning the dead into dwarf zombies to do his bidding and take over the world.

The first thing one is struck with is how beautifully filmed “Phantasm” is. It’s colors are crisp and the film’s mise-en-scene (the way the images on the screen are constructed) is very pleasing to the eye. It’s sound quality is quite intriguing at times as it’s well used to create suspense and mood. Well, I did say at times it does. There are other times the sound quality during conversations are quite overdone and doesn’t seem to match up with what is going on in the scene.

Yet, the film does draw you into it in spite of the often farfetched plot and uneven acting. It is scary and this element of the film is made more so by its well photographed scenes. As mentioned earlier, they are pleasing to the eye which betrays the viewer to become comfortable with the images making the shocking scenes the film has become famous for more disturbing. In fact, the scenes were so disturbing the Motion Picture Academy of America (MPAA) originally gave “Phantasm” an X rating due to the now famous scenes with the Killing Spheres. They soon relented to giving the film an R rating when some phone calls were made by some influential distributors. Ah, Hollywood Politics at its best.

Unlike “Phantasm,” William Friedkin’s “The Exorcist” is anything but low budgeted. In fact, it was nominate for Ten Academy Awards including Best Picture which it lost to “The Sting.” However, it did win the Award for Best Sound and Best Adapted Screenplay. The film was adapted from the same named novel written by William Peter Blatty which was based upon a 1949 exorcism performed on a 13 year old boy named Robbie. The rite lasted several months and took place in the Midwest. The film itself was made during the time when the horror genre was focused on themes which dealt with demonic possession of children such as “Rosemary’s Baby” and “The Omen.”

What strikes one watching “The Exorcist” is how it takes its time to build a relationship between its characters and the audience. They develop before our eyes into people we might know therefore allowing us to identify with their plight. This adds a sense of realism to the film even though we know it’s all just a story to entertain and scare us. This is commonly known as the suspension of disbelief and the film does this with great effect making the horrific parts the film is well known for all the more terrifyingly real.

The film begins in Iraq as a Father Merrin (as portrayed by Max von Sydow) is on an archaeological dig. He finds a small statue of Pazuzu who was considered the king of the demons of the wind in Assyrian and Babylonian mythology. He later comes across a much larger version of the statue and sees two dogs fighting nearby. The supernatural elements of this scene foretells the development of the remainder of the film although the audience does not quite know how it will do so. We just know it does.

The film then travels to Georgetown University in Washington, DC where a film is being made staring Chris MacNeil (as portrayed by Ellen Burstyn) who is noticed by Father Damien Karras (as portrayed by playwright Jason Miller) who admires her performance from afar. It is soon revealed Father Damien is having doubts about his faith as his mother’s physical condition is worsening. We then meet Chris MacNeil’s 12-year-old daughter Regan (as portrayed by Linda Blair in her first role) and begin to become familiar with their relationship.

However, Regan soon shows disturbing signs of what is first perceived as physical and then mental illness by the medical community after she finds a Ouija Board and begin communicating with a “Captain Howdy.” After all medical and psychiatric examinations fail to find a cause to Regan’s increasingly violent behavior, the doctors suggest she seek an exorcism for her daughter believing whatever is ailing poor Regan is psychosomatic and the rite will shock her out of it. How little do they know.

Father Damien is then approached by Regan’s mother and he eventually agrees to seek permission from the Church to perform the exorcist. He is accompanied by Father Merrin who is revealed to one of the few people who has had experience in performing the rite. This is where the fun begins as the most terrifying segments of the film are revealed and it becomes easy to understand why there were lines of movie goers stretching a number of city blocks waiting to see the film only to leave the theater in fright before its conclusion.

However, this is not exactly the film those who saw it during it’s original release was introduced to. The now infamous "spider-walk scene" was added to the film when it was re-released in 2000 and known as “The Exorcist: The Version You've Never Seen” utilizing CGI for the special effect. The scene was made but cut from the original as it was considered technically ineffective and added nothing to the film.

Unfortunately, the year 2000 was a time when it was felt re working films with the new technology would somehow make them better as it did (but really didn’t) for the Star Wars trilogy (chapters IV, V, and VI). So, the scene was put back in the “enhanced” version to gain more financial life from the film. Ah, Hollywood at its worse. But, since we only have to endure the unnecessary scene for a few seconds, the horrifying joy of “The Exorcist” remains in tact.

The third and final film of the evening was the near Midnight screening of something quite unique. It was an animated version of the 1968 classic “Night of the Living Dead” Directed by George A. Romero. Entitled, “Night of the Living Dead: Re-Animated” this re-envisioning of the film involved a multitude of artists and animators from around the world who placed their work on celluloid ranging from classic animation to sock puppets over the original film’s sound track.

The pieces by individual artists were organized by it’s curator Mike Schneider who said that this film takes the original and emphasizes certain images and themes one may miss during a typical screening of the film. Therefore, according to Mr. Schneider, it encourages the audience to take another look at the original with eye prepared to not only see what was re revealed to them but to seek out other aspects of the film they may not have noticed before. Indeed, this film does just that and is well worth watching.

In addition to the films being shown, musical guest Rooster Baby and Nu Prosta Kief* performed between the films. They were loud, bizarre, and perfect for the event. The crowd who came out for the films danced in their appreciation of the music they heard which made the watching of the films even more enjoyable.

The Severed Sinema* Series showcases the best classic horror, cult, and art house cinema each month whose goal is to act as a vessel for people to experience, re-live, and enjoy the golden era of extreme cinema in all its scary, sleazy, and sometimes cheesy glory. The next installment of The Severed Sinema* Series will be held at The Sherman Theatre* in Stroudsburg, PA on Thursday November 19th beginning at 7pm featuring the films entitled, “Horror Hotel” and “Carnival of Souls” along with a midnight showing of the classic experimental film “Un Chien Andalou.”

The next events taking place at The Sherman Theater includes a performance by Natural Breakdown* on Saturday October 24th at 8pm whose music is known to raise the consciousness of all who hear them through a winding river of sound and the annual midnight screening of “The Rocky Horror Picture Show” on Saturday October 31st which will be preceded by a pre party beginning at 10pm. Please Contact The Sherman Theatre* at 570-420-2808 for more information. You’ll find more photographs in The Forwardian Arts Society Film/Video 2009 Gallery.

The websites and email addresses of those mentioned in the article are The Sherman Theatre* at www.shermantheatre.com, Severed Sinema at severedsinema@hotmail.com, “Night of the Living Dead Re-Animated” at www.notldr.com, Mike Schneider at www.neoflux-animator.com, Nu Prosta Kief* at www.myspace.com/nuprostakaif, and Natural Breakdown* at www.myspace.com/thenaturalbreakdown.

(*) denotes members of The Forwardian Arts Society in good standing and are considered Our Good Friends.
Posted by Unknown at 6:32 PM