The Cars Came Out 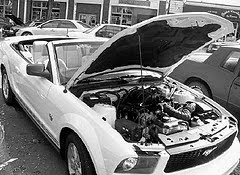 An Autos in Autumn Show took place throughout downtown Stroudsburg, PA on Saturday October 10th featuring cars from The DWG Classic Car Club, The Keystone Region MG Club, The Porsche Club of America, and TriCounty Corvettes. There were a great deal of food, crafts, arts, and music to complement the day. Among those performing were Randy Bigness* who was there with EA Knoll* Productions and Christian Porter* who was there with his father. Both had distinctive styles which reflected the variety of the automobiles shown throughout the day. Among the artists was Barbara Robinson* who recorded the event on her canvas. It was an enjoyable event proving to be a relaxing outing as the fall season begins its approach. You find more photographs in The Forwardian Arts Society Autos in Autumn 2009 Gallery. www.myspace.com/forwardian_arts

(*) denotes members of The Forwardian Arts Society in good standing and are considered Our Good Friends.
Posted by Unknown at 5:32 PM