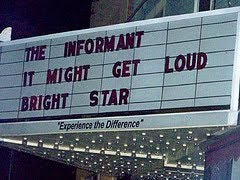 Bright star, would I were steadfast as thou art--
Not in lone splendour hung aloft the night
And watching, with eternal lids apart,
Like nature's patient, sleepless Eremite,
The moving waters at their priestlike task
Of pure ablution round earth's human shores,
Or gazing on the new soft-fallen mask
Of snow upon the mountains and the moors--
No--yet still stedfast, still unchangeable,
Pillow'd upon my fair love's ripening breast,
To feel for ever its soft fall and swell,
Awake for ever in a sweet unrest,
Still, still to hear her tender-taken breath,
And so live ever--or else swoon to death.

The film “Bright Star” is said to be inspired by the sonnet appearing above and by the love letters 19th-century Romantic poet John Keats (who is portrayed by Ben Whishaw) exchanged with Fanny Brawne (who is portrayed by Abbie Cornish) during the later stages of his life around the year 1820. The film takes place in the time when Keats’ brother Tom is dieing of tuberculosis and his change of residence near Hampstead Heath in which Fanny Brawne was staying with her mother soon after his brother succumbs to the condition. He quickly falls in love with Miss. Brawne even though his affection for her (by historical accounts) seemed to bring him more vexation than comfort.

The film touches very little on this vexations rather focusing on the romantic nature of the relationship. Yet, it does this in a very interesting way. The pace of the film is very slow as if the director wanted to capture the period and its character with all its nuance in tact. This is a monumental endeavor and it seemed to work. But it seemed to work all too well. This reviewer could not help but speculate a person who lived in the early 1800’s could relate to everything happening in the film as it depicted recognizable aspects of their lives. But, this tortoise like slowness of movement and gentile speech lacked what we now perceive as the honest human emotion we express in our day to day living we‘re all convinced makes life worthwhile.

The film seems to hold very little members of a 21st century audience could maintain an interest in. Yet, we soon discover this stillness of movement both physically and emotionally proves to be a very potent tool the film maker utilizes as she explore the depth of what is means to be human. Just as the moving waters rippling across a pond is more note worthy to those who only know of its stillness, the lack of emotional expressions throughout the film intensifies them when they do occur.

Normally, the recitation of poetry can be very boring in a film. Yet, the emotion expressed in the letters exchanged between Keats and Brawne is enlivening since the lack of passion throughout the film creates a void the audience desperately seeks to fill. We are compelled to listen to every word the poet utters even to the extent of staying seated during the closing credits as a one of Keats works is recited. Perhaps this is a commentary on life and the effects love has on it.

There are many times when we encounter love do that we seem to realize how dull and ordinary our lives were before that moment. We are touched by how love has changed not only who we perceive ourselves to be but the whole world as well. We become more gentle and kind to ourselves and others or as the words of Keats puts it, “More fairer than fair.” We experience something that can not be explained but we all recognize it.

We call it love, but this is only because we lack the wisdom to ascertain it’s true name. But, in spite of this unknowing (or because of it) we embrace it as we instinctively know it is what makes us worthwhile. But, what makes this love (as we call it) worthwhile? Is it not the entirety of our lives that preceded our encounter with it. Would we know it if it or of anything else were not for experiencing what it is not?

The film heightens our emotional connection to the those of its characters by keeping them hidden until a rare moment reveals them. It is then we reveal ourselves to ourselves as we begin to realize what we have kept hidden underneath the facade of our modern day etiquettes. Perhaps there will be a time when these mannerisms will be judged lacking of emotion by those who claim to be more alive than we.

While to say the film is enjoyable to watch could be a stretch due to the nature of its pacing. But, the emotions it inspires in contrast are worthwhile experiencing. Especially, since they could not be experienced in quite the same way by many in our period.

“Bright Star” is rated PG and is currently running at The Pocono Community Theatre in East Stroudsburg, PA. You may call 570-421-3456 or visit their website at www.poconocommunitytheater.org for show times and dates. Most films run one week but some films may be held over for an additional week or two depending on ticket sales.

“Bright Star” was the film viewed and discussed during the October Film and Chat Gathering presented by The Forwardian Arts Society on Friday October 2nd at The Pocono Community Theater. The next Film and Chat Gathering will take place Friday November 6th. The Pocono Community Theater provides a free beverage to all who participate in the chat after the film. All film lovers are invited to attend.