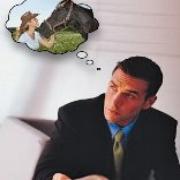 The Shawnee Playhouse in Shawnee on the Delaware, PA presented The Worthington Players production of the Original Full Length Play which won their 2011 Playwright Competition as part of The Shawnee Original Playwright Series (SOPS). The annual event is a result of inviting playwrights to send in their original works, forming a panel to select the finalist, presenting the chosen plays in a series of staged readings, and tallying the votes received from the viewing audiences to determine which plays will be presented as full productions. This process not only gives a local playwright an opportunity to have his/her work presented on The Shawnee Playhouse stage but also gives the audiences who frequent the venue a chance to experience some new and interesting work.

This year’s selections for the Full Length Presentation was a comedy titled, “Visions of Johanna” written by Ken White. According to the playbill, the work is the first attempt at playwriting by the author which came about when the cable in his home went out and the situation left only two alternatives. They were either talking to his family or writing a play. The work produced indicates (as anyone who lives with their family knows) quality family time is very much overrated.

The play takes place in the Northeast US home of Austin (as portrayed by Scott E. MacIntosh) and Maryanne (as portrayed by Anne O’Brian) Hallerman whose adult son Stuart (as portrayed by Scotty Vinnacombe) lives with them. The parents are a likable couple with Austin being a retired professor in physics. Stuart is an unemployed journalist who spends a great deal of time in his room on his computer and occasionally contemplates “going over to the dark side” by beginning a blog in which he can write and post articles. A pretty popular idea with this reviewer.

Stuart is also in a relational transition as his fiancé Melanie (as portrayed by Eileen Cohen) recently broke up with him. This time in the wilderness of affections begins its end when a knock on the door reveals a vision of Johanna (as portrayed by Nicole Dietze) who enters his life along with a dark, secretive, and amusing past. Part of this past is a former (although he doesn’t quite accept it) fiancé Winston (as portrayed by Mike Duffy) follows her from her Georgian origins. This is further complicated when Melanie enters the home with intentions to resume were relationship with Stuart.

All this provided a very amusing theatrical experience as there are many funny lines throughout the work. The cast was rounded off with the appearance of Brian Foley who portrayed a police officer who brought about a resolution to the Johanna revelations and allowed for the play to enjoy a very well deserved happy ending. However, although the overall production was an enjoyable one to watch, there were certain aspects that kept it from becoming a complete theatrical success.

The first being the staging of the character Winston. Although the actor portrayed him well, there were several times his presence on stage felt uncomfortable as his character had really nothing to do during the scene. This was quite evident during his early scene in which he stood literarily twiddling his thumbs while Austin and Maryanne conversed with one another. Another scene was while the play revealed the past of Johanna in which every character on stage were animated by the revelation except for Winston who resumed his thumb twiddling.

Another aspect lacking in the production was how the conversation between a number of characters in an excess of two were presented. This was especially true of the dinner conversation scene which demonstrated why many productions avoid staging scenes around tables in which actors’ backs are toward the audience. However, the scenes in which two characters were conversing were very well done as they revealed a great deal about their personalities and the depth of their relationships with one another. In fact, one especially poignant exchange takes place between Stuart and Melanie as they make their final parting. There still remains many good reasons to see “Visions of Johanna” but, even if there weren’t, this one scene would be a very good reason to do so.

The Shawnee Playhouse presentation of The Worthington Players production of the Original Full Length Play which won their 2011 Playwright Competition as part of The Shawnee Original Playwright Series (SOPS) titled, “Visions of Johanna” was written by Ken White. It was Directed by Amanda Kalinowski. The Production Manager was David Schappert. Taylor LiBardi served as the production’s Junior Stage Manager while Marshall Haskell served as Lighting and Sound Tech. Special thanks were given in the playbill to Juliet Dunham, Kenny Luckey, and Pastor Karl Viernstein.

The Worthington Players production of “Visions of Johanna” by Ken White continues its run at The Shawnee Playhouse in Shawnee on the Delaware, PA until Sunday February 12th. In spite of the areas this reviewer found lacking, the play remains one in which theatre lovers are bound to enjoy. There are a number of moments that touches one with laughter along with a few in which a quiet pondering in the heart takes place. Although the later of these moments are rare and very subtle, they still can be discovered if one would just keep an ear open to them.

The Worthington Players were established in 1999 and is the non-musical contingent of the Shawnee Playhouse. They present a variety of semi-professional theatrical productions from January through May working with community members to bring a quality-working atmosphere for those participating in the production and a quality performance for those attending. Their Original Playwright Series is one of the many programs the offer to the community.

As mentioned earlier, “Visions of Johanna” by Ken White is the full length play chosen from those submitted for The Worthington Players 2011 playwright competition and to be presented during The Shawnee Original Playwright Series (SOPS). The competition also selects two One Act Plays to be presented as well. This year’s winners were “A Cabin Fit for a King” by Julie Luongo and Sarah McCarroll and “The Messenger” by Paul Kodiak. They were presented January 7th - 15th. You may read our review at www.facebook.com/notes/paul-adam-smeltz/theatrical-review-original-one-act-plays/10150460420031232. “Visions of Johanna” by Ken White continues its run until February 12th.

The Worthington Players 2012 playwright competition discontinued accepting original work on Tuesday January 31st and will begin holding Staged Readings for the finalist on Friday February 24th and continue to do so until Friday March 30th. This stage of the competition will consist of  a number of actors who will read the plays submitted for the competition from the script. Audiences attending the readings will be afforded the opportunity to vote for the work they enjoy the most. Those receiving the most votes will be presented as full productions early in 2013.

The producers of the productions presented at The Shawnee Playhouse are Ginny and Charlie Kirkwood while the group sales manager is Mary Horn. The Box Office Staff includes Stacey Mattern and Ariel Hudak while Becky Haskell serves as the playhouse’s Sales and Marketing Director. The Executive Director of The Shawnee Playhouse is Midge McClosky. Please contact The Shawnee Playhouse at 570-421-5093 or Explore their website at www.theshawneeplayhouse.com for more information and to reserve your ticket for their upcoming presentations.

Those who enjoy the Passionate Art Lover level of membership in The Forwardian Arts Society are offered a $3.00 discount off the admission fee of The Shawnee Playhouse Productions (excluding Children Theatrical Productions and those presented by non Shawnee Production Companies). Those who have seen the productions mentioned in this review are welcomed to share their thoughts and reflections by leaving a comment with this posting. To learn more about The Forwardian Arts Society and all they have to offer, please explore their website at www.theforwardianartssociety.com.

Photograph provided by The Shawnee Playhouse.
Posted by Unknown at 2:26 PM