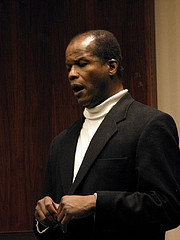 The Eastern Monroe Public Library in Stroudsburg, PA presented “Celebrating Diversity in Pocono, PA” on Friday February 3rd featuring Concert Baritone Phillip Mentor accompanied by Pianist Pauline Fox as part of their BookHouse Series. As the title suggested, the evening was filled with a variety of musical compositions ranging from those originating from the Emerald Isle of Ireland to the Great White Way of Broadway along with a delightful visit to 123 Sesame Street. The capacity crowd’s enjoyment of the performance were enhanced by the considerable talents of Mr. Mentor whose voice and phrasing of each piece created an inspired appreciation for it as it became re written in the heart of each listener.

Stories were knitted between each selection creating not only a deeper understanding of the song’s unique personality but generated warmth as Mr. Mentor’s approach to he craft was revealed, This allowed the audience to truly be a part of the program and not merely spectators confined to whatever they can experience through their hearing. The communal nature of the performance honored the celebration which eventually transformed the diversity into a unification between the spirits who resided in the library that evening.

As mentioned earlier, Mr. Mentor was accompanied by Ms. Pauline Fox on piano. Her expertise with the instrument enhanced the tonal nuances of each piece as her reputation of having the ability to do just that increased its worthiness to receive such praise with each passing note. As they combined with Mr. Mentor’s marvelous voice, the vibrations lingered within the heart and could be rediscovered whenever a memory of the concert was induced to resurface. In other words, it was a nice evening and you’ll be able to view more photographs in The Bookhouse 2012 Gallery at www.facebook.com/media/set/?set=a.10150596755195421.441761.636000420&type=3&l=3401c5d76f.

Phillip Mentor was born in Belmont, Port of Spain #which is the capital of the Republic of Trinidad and Tobago and became a trained opera singer performing in musical productions and with symphony orchestras. Among his awards are first place in the North American Guild Voice Competition, African-American Singer of the Year in 1986, first runner-up in the Metropolitan Opera Regional and Outstanding Young Vocalist of New jersey. He has conducted several Master Classes and Workshops at several universities across the United States. You may learn more about Phillip Mentor by exploring his website at www.phillipmentor.com.

The Eastern Monroe Public Library (aka The Hughes Library) is located on N. 9th Street (aka route 611) in Stroudsburg, PA. It is the main branch of the Monroe County, PA library system which include their Pocono Township Branch in Tannersville, PA and their Smithfield’s Branch in Marshalls Creek, PA. The library offers access to numerous books, DVDs, Audio Recordings, and cultural programs free to the public. The library’s BookHouse series is part of its cultural programs designed to provide a venue for literary and musical events which are outside of the commercial and literary mainstream.

The next Bookhouse Concert will feature an evening of Celtic Music with “Four Shillings Short” on Friday May 18th beginning at 7:30pm. Please Explore The Eastern Monroe Public Library Website at www.monroepl.org to learn more information about the library, their BookHouse series, and all the institution has to offer the community.
Posted by Unknown at 7:26 PM