A Transformative Night of ArtMusic 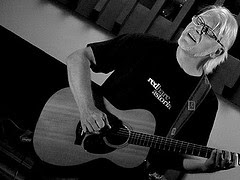 The ArtMusic Coffeehouse in East Stroudsburg, PA presented singer/songwriter Hans York on Saturday April 30th. After the program, the performer shared an observation on how caterpillars live their lives until one day they cease doing all the things they do to remain caterpillars and begin the process of becoming butterflies. He further shared how humans are in the process of being human in our present state and will soon begin the process of transcending toward something more grand. Those who came to the Slepian home for the concert shared a similar transformation as very few left unchanged bye the music the experienced.

Hans York was born and raised in Germany during the allied occupation from which he was introduced to sounds embodied in music originating from the UK and US. While I attended collage, I’ve often been fascinated by the insights students from other countries had in regards to the US and its culture. This sense of fascination was revisited while I listened to Mr. York’s insightful interpretation of the musical styles he grew up with. His bouncy rhythms and jubilant lyrics mood moved the audience to a new understanding of the music they have grown all too familiar with. This was a welcomed re introduction as could be seen in the glittering eyes, the snapping fingers, and the tapping feet in all who heard the songs sung that night.

As with all Artmusic Concerts, the music presented by Hans York was preceded by the soothing and meditative sounds created by composer, keyboardist, and host of the event, Don Slepian. The mood he creates through his musical interludes never fails to enhance the performance which follows. Tonight was no exception as each tone echoed upon the soul of each listener preparing them for the wonderful music, food, and conversation eager to be shared. You’ll find more Photographs taken during the concert in The ArtMusic Coffeehouse 2011 Gallery at www.facebook.com/forwardian.dude.

The ArtMusic Coffeehouse is held in the home of Don Slepian and Jan Julia who reside in the borough of East Stroudsburg, PA as part of the Concerts In Your Home Series. A variety of musical forms are presented including folk, jazz, classical, and electronic music. Although the concerts welcomes all who wish to attend, seating is limited as it they take place in a private home. The Next The ArtMusic Coffeehouse Concert will feature Bob Marshall on Friday May 6th, Lynn Hanson on Thursday May 19th, Sundad on Friday May 27th, Craig Bickhart on Saturday June 11th, and Robb Taylor on Saturday June 25th. They begin at 8pm. Please Explore The ArtMusic Coffeehouse Website at www.ArtMusicCoffeehouse.com or Call 570-476-6307 for more information and to reserve your seat.
Posted by Unknown at 6:48 PM