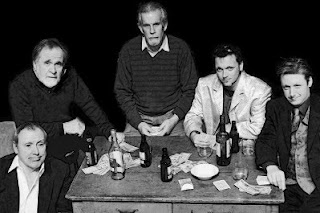 The Shawnee Playhouse in Shawnee on the Delaware, PA presented The Center Stage Players‘ production of “The Seafarer” by Conor McPherson which was written in 2006. It was first performed in London's National Theatre that same year and received an Olivier Award nomination for Best Play. The play was then performed in the United States where it earned a Tony nomination in 2008. The work is best known for being written in a working-class Dublin use of language while adopting the lyricism found throughout the Irish theatre tradition.

“The Seafarer” takes it name from an Anglo-Saxon poem written circa 755 A. D. and is titled, “The Seafarer.” It is one of the four surviving manuscripts recorded in the Exeter Book and is told from the point of view of an old seafarer who is reminiscing about his life. The play takes place on Christmas eve in North Dublin, Ireland and is about a man named, “James ‘Sharky’ Harkin” (as portrayed by Denny Carrig) who is an Alcoholic. He comes to live with his blind older brother named “Richard Harkin” (as portrayed by Scott E. McIntosh) after losing his job. The play begins as “Sharky” enters the house to discover his brother and a house guest named, “Ivan Curry” (as portrayed by Jack Butler who also served the production as one of its Set Designers) are beginning to awaken from a night of drunkenness.

It may be prudent to note that the play, at this point, moves as slowly as many of the characters in the scene as they begin to awaken from their drunken stupor. While this pacing may be seen as painfully tedious to many theatre goers, it serves as a faithful reflection of the characters state of being and encourages the audience to emphasize with them. It also allows us to not only learn about the characters’ traits and their place in the play, but we also learn of their deeper pain and how it was instilled in their souls.

The play progresses as “Sharkey” discovers his brother, Richard, has invited friends over for a night of drinking and poker. This bothers as “Sharkey” as he had hoped to stay off the bottle for the holidays in order to combat his alcoholic demons. The guest include a man named, “Nicky Giblin” (as portrayed by David Schappert) who has been as “Sharkey‘s” love rival and a mysterious Mr. Lockhart (as portrayed by Patrick Turner who serves as a member of The Center Stage Players’ Board of Directors) whom we soon discover is a demon more insidious than those found in any bottle.

Prior to the game commencing, Mr. Lockhart reminds “Sharky” he had wagered his soul in a game of poker against Lockhart in a bid to gain his freedom after being arrested for the killing of a vagrant twenty-five years ago. We also discover that, in spite of winning that game, “Sharky” inexplicably promised Mr. Lockhart another game in the future so he would have an opportunity to win his soul and take him to Hell. This leads to a gamut of emotions as Mr. Lockhart entices not only “Sharky” into reliving the regrets of his past but of those who enter into the game thus creating a Hell for them to dwell during its duration.

The Center Stage Players’ production of “The Seafarer” by Conor McPherson was very well done as it’s slow methodic pacing compelled the audience to experience each painful wound as this slowly festered before our eyes. This allowed each theatre goer to examine the scares life has placed within them and to contemplate their addictive attachment to them. The play ends with a sense of accomplishment and redemption. Perhaps this may give hope to those who recognize their demons and wish to leave the Hell they have created.

The Executive Director of The Shawnee Playhouse is Midge McClosky while the producers are Ginny and Charlie Kirkwood. The Sales Manager is Mary Horn as Becky Haskell serves in Marketing. Members of the Box Office Staff are Barbara Ross and Christina McManus. The Playhouse’s costumer is Missy Benefield. The Shawnee Playhouse publicity is handled by Amy Cramer while David Schrage is its Webmaster.

This presentation of The Center Stage Players’ production of “The Seafarer” by Conor McPherson will conclude its run at The Shawnee Playhouse in Shawnee on the Delaware, PA until May 15th. I would recommend seeing this production as it’s a wonderful opportunity to see actors who love the theatre performing a comedy that truly inspires its audience to laugh. It also allows the audience to explore how the rumors of their lives in which they try to keep hidden from others would look in the bright light of humor.

The Center Stage Players is a non-profit community theater group which was formed in April of 1990 and led by a board of directors. Membership is open to everyone regardless of experience. All auditions to their productions are open to the public as they strive to provide an environment in which persons with an interest in theater can grow and develop in all aspects of theater. Please feel free to Explore The Center Stage Players Website at www.sites.google.com/site/centerstageplayersorg to learn more information about them.

The Shawnee Playhouse provides professional quality year-round entertainment in a historic yet comfortable setting while bringing their guests a variety of theatrical experiences to the residents and vacationers of the area. They also serve as a training ground for young theatre performers and technicians. Future presentations at The Shawnee Playhouse will include “River’s Edge: The Story of Shawnee” by Midge McClosky and Rod Foote May 20th - September 2nd, “Sisters of Swing: The Story of the Andrews Sisters” by Beth Gilleland, Bob Beverage, and Raymond Berg June 1st - September 3rd, and “Nunsense 2: The Second Coming” by Dan Goggin June 17th - September 4th. Please contact The Shawnee Playhouse at 570-421-5093 or Explore their Website at www.theshawneeplayhouse.com for more information and to reserve your ticket.

Those who enjoy the Passionate Art Lover level of membership in The Forwardian Arts Society are offered a $3.00 discount off the admission fee of selected productions (excluding Children Theatrical Productions and those presented by non Shawnee Production Companies) of The Shawnee Playhouse.

Photograph provided by The Shawnee Playhouse and depicts the characters in The Center Stage Players‘ Production of “The Seafarer” by Conor McPherson.
Posted by Unknown at 9:13 PM

Τhank you for shаring уour іnfo. I
гeally appгecіatе yоur efforts anԁ I will be waiting fоr уour next wгite
ups thаnk you once agaіn.