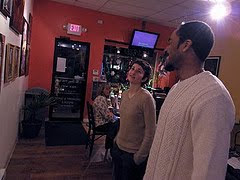 The Cheeky Monkey Coffeehouse in Stroudsburg, PA held an Artist’s Reception which featured the work of Ka-son Reeves on Friday March 4th. While most of the wall containing his work were of the stylized depictions of the human condition which many who come to love his work are familiar with, there were a few pieces that were quite different demonstrating his proficiency as an artist. These ranged from realism to symbolic depictions of life’s inner struggles and triumphs.

One of Ka-Son’s works is titled, “Rif” which depicts a young man looking out upon a city landscape. During a conversation with the artist while experiencing this very realistic depiction, he shared his admiration of the great artists such as Rembrandt who utilized shadows and dark textures in his backgrounds until they gained a uncommon equality with the subject without detracting from it’s significance. This masterful feat can be easily seen echoed in this work as each skillful stroke of colors enhances both the fore and background bringing the viewer deeper into not only the scene and the young man’s ponderings but into the viewer as well.

Another one of Ka-Son’s works is a symbolic depiction consisting of two arms burdened with chains. As with all symbolic images, the viewer is free to create their own interpretation. I won’t endeavor to offer my reflections upon this image as it would be erroneous to deprive those who visit the gallery after reading this article of the enjoyment of embracing an interpretation of their own. However, there is something which derived from my continued conversation with Ka-Son which bears repeating.

Ka-Son told me he has many such works in his home which are presently unfinished. He said this was due to his hesitancy in completing them until he had enough talent to do justice to the work. This reminded me of the excavations of Pompeii. When the Roman city of Pompeii was discovered under the ashes of the ancient eruption of Mount Vesuvius, a truer depiction of life in the 70AD era came into being surpassing all previous speculations and understandings. The importance of the Archeological Information it divulged was and continues to be beyond measure.

However, in spite of the excitement these revelations inspired, it was decided much of the area would remain untouched. It was realized the tools they had may be inadequate to explore and comprehend the historical treasures they recently encountered. An agreements was reached to leave much of what was there to a future time when equipment and skills of a more enlightened scientific community matched the task of unwrapping all that is yet to be discovered without detracting from it’s significant offerings. The decision of Ka-Son not to complete his more symbolic pieces until he feels it’s time to do so reflects this disciplined restraint and creates a deeper appreciation for what his considerable skills are presently able to manifest.

The music accompanying the reception was provided by singer/songwriter Jeni Hacket who has become a favorite among those who frequent The Cheeky Monkey Coffeehouse. The soulful combination of original songs and those established by others enhanced the delightful atmosphere permeating the thoughts and conversations of the many who attended the event. Jeni has an uncanny ability of touching an undiscovered quality of each song and present it in a new way. It was often a challenge to determine where her rendition of a song (her own or others) began and those instilled in the listeners’ spirit ended.

The next Artist’s Reception The Cheeky Monkey Coffeehouse* in Stroudsburg, PA will feature the work of David Ohkerling and be held on Friday May 6th beginning at 6pm. This Exhibition will continue until June 30th. The current Exhibition featuring the Art of Ka-Son Reeves continues until May 1st. You’ll find more photographs taken during the reception in The Cheeky Monkey 2011 Gallery at www.facebook.com/forwardian.dude.

The Cheeky Monkey Coffeehouse offers a variety of coffee, drinks, and culinary treats along with events such as the one described in this article. Future events include their Open Mic Night with takes place every Tuesday evening, The “Just Say It: A Spoken Word Symposium” events which takes place every Thursday evening, their monthly comedy night featuring the Off Track Players on Friday March 11th, The Urban Mountain Voices’ monthly Youth Open Mic Night on Saturday March 26th, and The Forwardian Arts Society monthly Film Lovers’ Gathering on Friday April 15th. Please Explore The Cheeky Monkey Coffeehouse Website at www.cheekymonkeycoffee.com or Call 570-420-8222 for more information.
Posted by Unknown at 4:02 PM

Thanks for sharing the link - but unfortunately it seems to be not working? Does anybody here at forwardianartssociety.blogspot.com have a mirror or another source?