A House Filled with the Richness of Ragtime 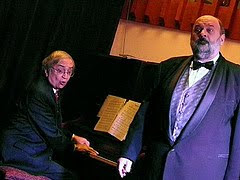 The ArtMusic Coffeehouse in East Stroudsburg, PA presented the duo known as “Rags to Riches” on Saturday March 26th. An evening of Ragtime melodies delighted the numerous music lovers who attended the concert while Don Slepian and Jan Julia provided an hospitable atmosphere enhancing the musical performance.

Those who frequent the concerts were welcomed back by the culinary treats and the delectable conversations they have shared with friends they’ve established throughout the years. However, many of those who have only recently discovered The ArtMusic Coffeehouse Series mentioned a certain feeling of familiarity as they entered the dwelling as if they have been there for quite a long time. They soon realized this familiarity was due to the fact the home of Don Slepian and Jan Julia reflects the home we all have deep inside our hearts.

As with all concerts given at The ArtMusic Coffeehouse, Rags to Riches was preceded by a performance given by host Don Slepian whose original, impromptu compositions laid a relaxing groundwork enhancing the musical journey that was soon to follow. Rags to Riches’ pianist Don Kawash and bass-baritone Randy Shupp faithfully captures the spirit of the Ragtime Genre as their overwhelming love for the music shown through in their performance. The joyous expression they transmitted were clearly received by all who came to hear them as evident in the glittering smiles seen in each pair of eyes. You’ll find more information about Rags to Riches and the musical history of Ragtime at www.gaslightrags2riches.com. You’ll find more Photographs taken during the concert in The ArtMusic Coffeehouse 2011 Gallery at www.facebook.com/forwardian.dude.

The ArtMusic Coffeehouse holds its concert series in the home of Don Slepian and Jan Julia who reside in the borough of East Stroudsburg, PA. A variety of musical forms are presented including folk, jazz, classical, and electronic music. Although the concerts welcomes all who wish to attend, seating is limited as it they take place in a private home. The Next The ArtMusic Coffeehouse Concert will feature Ben Carol on Tuesday April 5th and Sundad on Saturday April 16th. Both concerts will begin at 8pm. Please Explore The ArtMusic Coffeehouse Website at www.ArtMusicCoffeehouse.com or Call 570-476-6307 for more information and to reserve your seat.
Posted by Unknown at 4:53 PM