A Monkey Off the Tracks 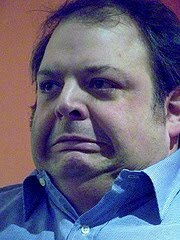 The Cheeky Monkey Coffeehouse in Stroudsburg, PA hosted a Comedy Night on Friday December 3rd presented by The Off Track Players. The comedy troupe featured local comedians Joseph Carnevale, Kevin Cronk, Penny Dee, Anthony DiSanto, Matt Duffin, and Tiffani Thompson who showcased their talents in a variety of sketches, monologues, and improvisational games which amused their audience. Audience members were invited to participate in this an other aspects of the show which enhanced the delight of experiencing it.

These games included one called, “ABC” in which a location was selected by the audience and each performer had to begin their sentence in alphabetical order in relation to where they were. Another game consisted of a member of the troupe stepping outside while the Audience selected the identity of a famous person he or she was to become when they re entered. It was up to the comedian to guess his or her identity after receiving a series of clues.

It was a fun night out and a great opportunity to hear some original work by local comics. The next Comedy Night at The Cheeky Monkey featuring The Off Track Players is scheduled for Friday January 14th beginning at 7pm. You’ll find more photographs taken during the December 3rd event in The Forwardian Arts Society Cheeky Monkey 2010 Gallery at www.myspace.com/forwardian_arts.

The Off-Track Comedy Players offer a plethora of comedic and non-comedic services (including live-action murder mystery shows) and are available for resorts, clubs as well as private or public events. Prior to Friday January 14th engagement at The Cheeky Monkey Coffeehouse, they’ll be appearing at The Daniels Family Resort in Canadensis, PA on Friday December 17th. Please Explore The Off-Track Comedy Players Website at www.offtrackcomedy.com or Call 570-486-6787 for more information.

Other future events at The Cheeky Monkey include The “Just Say It: A Spoken Word Symposium” events which take place every Thursday evening at 7pm, a Closing Reception on Saturday December 11th for an exhibition to benefit the "Thrive to Survive" Foundation, and a concert featuring singer/songwriter Jeni Hackett on Friday December 17th beginning at 6pm. The Cheeky Monkey Coffeehouse offers a variety of coffee, drinks, and culinary treats along with events such as the one described in this article. Please Explore The Cheeky Monkey Coffeehouse Website at www.cheekymonkeycoffee.com or Call 570-420-8222 for more information.
Posted by Unknown at 12:42 PM