Hendricks and Sekula at The Jukebox 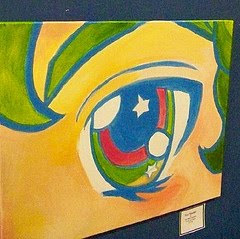 The Main Street Jukebox in Stroudsburg, PA held an Artist’s Reception featuring The Artwork of Arielle Sekula and Ana Maria Hendricks on Saturday December 4th. A sizable crowd gathered to partake of the varied images depicted upon the canvases. Although the two artists differed in style and technique, the pairing together of their work proved to be complimentary to one another.

Among the excellently crafted pieces, there are two that struck me in a profound way. The first was a piece created by Ana Maria Hendricks titled, “Unfinished Fantasy.” The title’s association to the work was quite evident as it did appear to have some unfinished qualities to it. However, upon deeper reflection, I began to wonder about fantasies and if, by their very nature, are meant to be unfinished.

One can say a fantasy is finished when it becomes a reality and in many respects that’s true. However, regardless whether the fulfillment of a fantasy results in a pleasurable or disappointing result, a fantasy dies in the process. This is because reality as a finite quality to it. It can be built upon since it is a part of life and the living of it, but not nearly to the same degree a fantasy can be. There is a very ethereal quality to fantasies not reliant on the dimensions of the physical world. This leave one contemplating which experience one really prefer.

The other painting that caught my attention was the piece titled, “Grunge” by Arielle Sekula. It is one of the fascinating works that has the ability to change depending upon the angle in which one is looking at it. It depicts a woman crawling out of what appears to be a hole. If the viewer stands at a distance from the piece, it appears she is following and coming closer with each effort. This gave a sense of eeriness and I found myself looking over my shoulder while I walked down the street after the reception was completed.

Music for the evening was provided by The Eric J. Becker Experimental Experience Project Tour/Business Edition whose original songs enhanced the evening. Those who have seen Eric perform in several venues including the Open Mic Nite he host at The Starbucks on Sunday Evenings were met by many familiar tunes. However, it was a special treat to encounter some new works which transcended the qualities of the older ones. A band consisting of Abby Braman on Banjo and Harmonica, Keith 'Kif' Haynes on Bass Guitar, and Charlie Abriel on Drums brought a musical depth to the songs Eric sang while playing his guitar. The quality of the performance left me a bit surprised the group has yet to record a CD and it is hope they’ll consider doing so as many would be eager for its release. You’ll find more photographs taken during the reception in The Forwardian Arts Society Main St. Jukebox 2010 Gallery at www.myspace.com/forwardian_arts.

In addition to Art Exhibitions and Concerts, The Main Street Jukebox offers recordings made on CDs, Tapes, and Vinyl. The Artwork of Arielle Sekula and Ana Maria Hendricks Exhibition continues until December 26th. Information on the Next Exhibition has yet to be released. Please Explore The Main St. Jukebox Website at www.myspace.com/mainstjukebox or call 570-424-2246 for more information about these events and all they have to offer.
Posted by Unknown at 2:45 PM