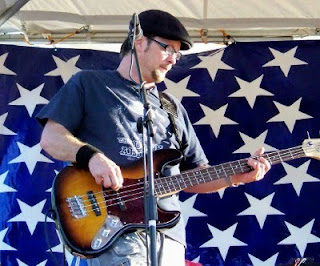 The Eastburg Community Alliance held their 9th Annual American Freedom Festival on Sunday July 4th at The Dansbury Park on Day St. in East Stroudsburg, PA in celebration of Independence day. Huge numbers of people came out to enjoy the food, music, and good times offered by the event. Whether it was relieving the heat of the day by taking a dip in the park’s public pool, visiting the many vendors who participated, watching a magic show, listening to one of the many bands who performed, or just hanging out with friends there were plenty of good times to be had.

The festival featured not one but two stages this year. The Alpha and Omega performance at the “Patriotic Stage” was given by DJ Patrick St. Richard who spun instrumentals designed to entertain and hypnotize all who listened. The main “American Spirit Stage” officially open the day’s festivities with a kick ass performance by “Mouths of Babes” whose strong vocals and music set the tone for the day giving all entering the park a foretaste of the riveting experiences yet to come.

These performances included those given by “Aces Over Eights” and “North of the City” on the “Patriotic Stage” along with Guitar Soloist Christian Porter, The Pocono Community Theater’s “Poconos Got Talent” Competition winner Zahra Josie and her crew, “Valley of the Giants,” “Pocono Duo,” and “Dewey Decimal and The System” on the “American Spirit Stage.” The music moved people to dance, relax, and nod their heads to the rhythmic bombardments as each note burst in the air surrounding them. Several of the performances expressed some patriotic sentiments befitting the day but this did not distract from the enjoyment of their performance by those who don’t share them.

Besides the music, there were plenty of vendors to explore, share a conversation with, and, perhaps, make a purchase from. These included Magician Mark Mysterrio who performed illusions along with his colleagues, The Unitarian Universalist Fellowship of the Poconos, Risk K Lingerie, The Sherman Theater, and The Pocono Community Theater along with spots supporting political candidates Rosemary Brown and Incumbent John Siptroth who are running for a seat in The PA House of Representatives for the 189th Legislative District. There were also a great number of food vendors selling a variety of foods closely associated with carnival cuisine. The prices ranged from the sensibly to the over priced but all seemed to dispensed with the concerned the current economy presents and gave way to the urges of their appetites.

The Festival concluded with remarks given by Joe Sestak who is a Candidate running for a seat in the U. S. Senate representing the state of PA, statements of gratitude from East Stroudsburg Downtown Manager Cheryl Lyn Hayne and Community Promotions Consultant Mike Kijewski who presided a drawing of the 50/50 raffle which gave those participating an opportunity to win $1000, and a performance by Randy Bigness who sang the national anthem while a representative from the military held the nation’s flag. All this was followed by a spectacular fireworks display which lit up the sky and the hearts of all who watched it.

The festival also served as an opportunity for Photography enthusiasts to partake of The Forwardian Arts Society Photography Lovers Gathering. Those who came to the park in order to participate took lots of pictures and shared them with one another throughout the day. The date and location of the next gathering is yet to be determined. However, suggestions in this regard are welcomed by anyone interested in participating as all levels of photographic skills are welcomed.

The Eastburg Community Alliance (ECA) is a group of local citizens in the East Stroudsburg, PA Community dedicated to enrich the prosperity of the community in which they love for all of its citizens. These individuals include Brian Crawford, Jim Phillips, John Divivo, John Schoonover, Kim Fisher, Marynell Strunk, Roger DeLarco, Scott MacLaren, and Stephen Washington. Their next event will be their “Crystal Street Block Party” held on Sunday October 10th featuring a sidewalk sale by local businesses, music, and pumpkin painting. Please Explore The Eastburg Community Alliance (ECA) Website at www.eastburgalliance.com or call 570-424-7540 for more information on their events, the bands and vendors in their American Freedom Festival, and all they have to offer.

What a great job on this article. Thank You for the kind words. Be Well.