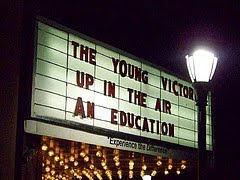 The film, “An Education” is based upon an article written by the British journalist Lynn Barber for the British Magazine called, “Granta.” Although the article later became an autobiographical novel entitled, “An Education (a memoir)”, the film is not based upon it. The film gained critical acclaim when shown at The 2009 Sundance Film Festival and The Toronto International Film Festival as well as being nominated for Three Academy of Motion Picture Arts and Sciences Award (AMPAS) Award in the categories of Best Picture, Best Actress, and Best Adapted Screenplay. Although the film is very good and very well made, this reviewer doesn’t see why it’s receiving so much acclaim.

The film takes place in England during the early 1960’s and is about a romantic relationship which develops between a 30 something year old man named, “David Goldman” as portrayed by Peter Sarsgaard and a sixteen year old girl named, “Jenny Miller” as portrayed by Carey Mulligan. Watching the film through modern eyes, it’s difficult to understand the only objections the young woman’s parents or teachers have in regards to the relationship is that the man is Jewish. In fact, it’s later in the film when Jenny confronts her father asking him why he never raised any objections to her desire to abandon her educational pursuits in order to begin a life with David.

Throughout the film, we see the development of Jenny and David’s relationship which is often manipulative and creepy. This is most evident in the scene depicting David waiting outside Jenny’s school for her and the scene she discovers his wealth come from thievery and deceit. These include visiting elderly people and stealing their artwork in order for it to be in his apartment where it would be better appreciated and the practice of moving black families into homes near elderly women who are afraid of them so he can then buy their homes below market value. When Jenny objects to these practices, she’s reminded this is how they’re able to have so much fun together and her sixteen year old understanding of the world succumbs to his reasoning. We also see how these experiences lead to the educational development of Jenny as she begins as an ordinary school girl prone to an affectionate flirtation, to an exploration of independent thinking willing to give up what is expected of her in order to pursue something she thinks is much worthwhile, to finally realizing all her thoughts and perceptions aren’t always what they seem.

The film is also an educational experience for those who view it as well. The audience is shown how those with an adult perspective can be easily deceived and manipulated by those who have a welcoming and self-assured air of respectability and financial success. Jenny’s parents are impressed by all this and often winds up suggesting trips David plans for himself and Jenny well in advance. It caused this reviewer to wonder what would impress those watching this film enough to forgo their better judgment.

As mentioned earlier, “An Education” is a good film and I recommend as a meaningful look into the life and discoveries of the Jenny Miller character. Was this the best film this reviewer has ever seen? Not really. This reviewer may not have heaped all the accolades it’s receiving. But, a film does not need a great deal of praise to be good. In fact, a great deal of praise sometimes indicates a film isn’t all that good at all. Fortunately, that’s not the case with this film so one can be assured, while they’re not watching something of great magnitude, they are watching something very meaningful.

“An Education” is rated PG and is currently running at The Pocono Community Theater in East Stroudsburg, PA. You may call 570-421-3456 for show times and dates. Most films run one week but some films may be held over for an additional week or two depending on ticket sales.

After the Friday February 5th showing of the film, The Forwardian Arts Society Gathered in The Pocono Community Theater’s Café to chat about it. The turnout was minimal but the conversation was very engaging. We invite you to join us Friday March 5th to watch a film and participate in an equally stimulating conversation. You’ll find more photographs in The Forwardian Arts Society Film and Chat Gathering 2010 Gallery at www.myspace.com/forwardian_arts. Please contact us through our website for more information.

Websites of those mentioned in this review are The Pocono Community Theater at www.poconocommunitytheater.org and The Forwardian Arts Society at www.theforwardianartssociety.com.
Posted by Unknown at 5:30 PM