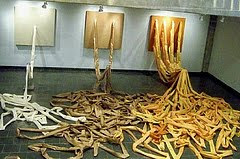 The East Stroudsburg University’s Art Department held an Artists’ Reception on Saturday February 20th featuring the works created by Line Bruntse and Matt Ferranto in a show entitled, “Inference Interrupted.” The exhibition is being held in The Madelon Powers Gallery located in the campus Fine and Performing Arts Center. The reception was preceded by a workshop conducted by Line Bruntse. The show consisted of sculptured works along with some two dimensional pieces created by both artists.

However, the most dominant of the works was the large piece created by Line Bruntse which consisted of a series of strips coming from the wall beginning in an orderly path but becoming entangled as their journeys continue until they find themselves enmeshed in each others destiny. The work invited its viewers to ponder how often the goals and endeavors of our lives often begin simply but soon become entangled with the trappings of the additional ingredients we feel are needed to secure its success and thereby denouncing our original inspirations as inadequate.

In creating these unnecessary fear of failure complications, we diminish our accomplishments (if they’re even realized) and ourselves for the lack of trust in our visions undermines our trust in everything we do. We see ourselves as unworthy failures because we merely allowed our reasoning to get in the way of our dreams. Thus, from the order we find in our simplistic dreams filled with hope do we encounter our chaotic nightmares filled with disappointing despair.

The work presented by Matt Ferranto consisted of much smaller pieces. The majority of these were found on the upper Mezzanine level of the gallery whose composition of wood, cardboard, paper, pins, polymer clay, and paint made these intricate pieces a point of interests to not only the adults who attended the opening but for the children who were there as well. His portion of the exhibition included a video presentation in which his creations were given movement. Many comically wobbled along often falling over themselves which invited the viewer to ponder how often we dress ourselves in our intricacies only to find ourselves falling over our own egos as we seek to impress those around us.

Inference is often defined as the act of passing from one proposition, statement, or judgment considered as true to another whose truth is believed to follow from that of the former. This truth can be interrupted by the realities that encounter or by the fears we manufacture. What the artists in this show seem to have in common is the perspective that how we see ourselves often depend upon our original perceptions and what we allow to modify them.

However, each artist demonstrates the extremes of each approach. Ms. Bruntse’s work implies not staying true to the simplicity of our original visions by allowing our fears to complicate them can often lead us to a demoralized existence while Mr. Ferranto’s work implies only going with our self centered perception of ourselves and thus ignoring the reality of our humanity can lead us to a fall. Perhaps there is a common ground in which we can travel through life in a more balanced manner and thus avoid some of the falls and disappointments we inflict ourselves with. You’ll find more photographs in The Forwardian Arts Society Visual Arts 2010 Gallery at www.myspace.com/forwardian_arts.

The websites of those mentioned in the article are The East Stroudsburg University’s Art Department at www.esu.edu, Line Bruntse at www.LineBruntse.com, and Matt Ferranto at www.spareroom.org.
Posted by Unknown at 2:09 PM