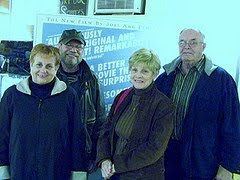 The film “A Serious Man” by the Cohn Brothers begins with a quote from a Jewish Scholar known as Rashi (an acronym of Rabbi Shlomo Yitzhaki) who was medieval French rabbi and authored the first comprehensive commentary on the Talmud as well as a comprehensive commentary on the Tanakh (Hebrew Bible). This opening quotation by Rashi seems to be the main theme throughout the film as it demonstrates a life unable to heed its advice. As “A Serious Man,” the main character of the film is unable to receive life simply.

The concept of being “A Serious Man” denotes a man who has given up the frivolities of life in order to do what is necessary to be seen as a responsible and productive member of society. “A Serious Man” gains a good job, raises a family, and becomes active in the spiritual community. He cares for the needs of others even to the point of neglecting his own. This brings the quote from the Jefferson Airplane song entitled, “Don't You Want Somebody To Love?” into focus as the film progress.

The film is set in 1967 and is centered around Larry Gopnik (as portrayed by Michael Stuhlbarg) who encounters one set of difficulties after another. His wife (as portrayed by Sari Wagner Lennick) wants to divorce him so she can be with to be with a family friend Sy Ableman (as portrayed by Fred Melamed), a student (as portrayed by David Kang) tries to bribe him and thwarts his desire to gain tenure at the college he teaches, and his brother (as portrayed by Richard Kind) moves in with the family and gets in trouble with the law for gambling. In addition to all this, his self absorbed children (as portrayed by Aaron Wolff and Jessica McManus) who only cares about the television antennae being turned in the right direction so they can watch “F Troop” regardless of what is going on around them. He is surrounded by people who refuse to take responsibility for their lives

As this reviewer was watching this film, he could not help but wonder, “Why doesn’t he just simply pick up and leave everyone to their own devices?” Well, he can’t. His sense of responsibility won’t let him. It pervades his entire existence. Event to the point of paying for the funeral of his wife’s boyfriend’s funeral. It is through this sense of responsibility that the joy he has always felt entitled to as long as you did your duty and did nothing wrong continues to elude him. In other words, his need to be seen as “A Serious Man” keeps him from seeing the truth he has been brought up to believe are lies and there is a much more simpler and meaningful approach to life bringing it a sense of joy.

This joy comes from discovering a truer sense of responsibility leading to a greater quality of productiveness. It is finding that “someone to love” and discovering it is oneself. The Larry Gopnik character is surrounded by people who refuse to take responsibility for their lives and places it on him all because he is willing to do so. It has been said one can not live one’s life while living someone else’s and this seems to be his lot in life. By taking responsibility for our own joy and happiness and not those of others who should do so for themselves, we become more productive as we begin doing what is best for us and stop trying to do what is not.

Although the film is deeply embedded in the Jewish Culture, one does not have to be Jewish to appreciate it. Anyone can see the effect of not living a full life has on the main character as everyone can ask themselves, “What responsibilities, which are not my own, am I taking on and are keeping me from living my life to the fullest?” It is good and noble to care for others. It is why we’re here in the first place. But, to do so to the point of foregoing who we are is self destructive and we cease to be victims of all that besets us by becoming volunteers through this ultimate of irresponsibility. Therefore, the film serves as a poignant reminder that a life lived simply without the complications arising from taking on other’s responsibilities contains a joy within that never dies.

“A Serous man” is rated R and is currently running at The Pocono Community Theater* in East Stroudsburg, PA. You may call 570-421-3456 for show times and dates. Most films run one week but some films may be held over for an additional week or two depending on ticket sales.

The website of The Pocono Community Theater* is www.poconocommunitytheater.org.

(*) denotes members of The Forwardian Arts Society in good standing and are considered Our Good Friends.
Posted by Unknown at 10:17 PM