Amplified Silence at The PCT 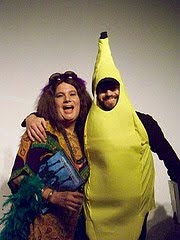 The Pocono Community Theater (PCT)* in East Stroudsburg, PA held a Halloween Fest on Thursday October 29th in conjunction with The Pocono Internet Broadcasting Company (PIBCO)* as a debut of their monthly Silent Movies to Loud Music Series. The event consisted of showing movies from the silent film era accompanied by musical performances by local bands. The films shown were Nosferatu with music by The Resonant*, The Cabinet of Dr. Caligari with music by Dream of Fire*, and Dr. Jekyll and Mr. Hyde with music by Dewey Decimal and The System*. The event was Emceed by Derek McCauley* of The Balrogian Screams Show and Steve “Omni” Parker* of The Stroudsburg Social Show which are both broadcast every Monday evening beginning at 7pm on PIBCO*. The evening also included a lip-synched appearance of Janis Joplin by Tom Augusta* and a costume contest.

The evening began with a showing of the 1922 horror classic “Nosferatu” which was originally titled (in English), “Nosferatu: A Symphony of Horror” or “Nosferatu: A Symphony of Terror.” The film is best known for being the very first film adaptation of Bram Stoker's novel entitled, “Dracula.” However, since the film company could not obtain the rights to the novel, the word vampire had to be changed to “Nosferatu” and the name of the lead character from Count Dracula to “Count Orlok” along with other details in the storyline. The combination of F. W. Murnau’s direction and the portrayal of Count Orlok by Max Schreck made “Nosferatu” one of the most note worthy movies of the German Expressionist silent film era.

The presentation of the film began with music provided by a DJ from PIBCO* and later by a local band known as The Resonant*. The act of removing the DJ equipment from the stage and setting up the band with all the technicalities that involved was an irritating distraction which diminished the enjoyment of the film. However, their actual performance eventually proved to be a satisfactory one as it complimented the portion of the film they shared the stage with.

Upon the ending of the film, an impromptu performance by Tom Augusta* as Janis Joplin occurred as the next segment of The PCT)* Halloween Fest were being set up. The performance was an enjoyable one which lent a touch of comedy as Janis was portrayed taking swigs of a bottle of booze while she sang. Those of us in the audience who knew about Janis Joplin’s heavy use of drugs and alcohol had no problem noting the truth of such moments while knowing they would never have been revealed during her actual performance in such an overt manner.

The next film was another note worthy movie of the German Expressionist silent film era. “The Cabinet of Dr. Caligari” was made in 1920 and directed by Robert Wiene and is about a deranged Dr. Caligari and his faithful sleepwalking Cesare as they are connected to a series of murders. The film is best known for its distorted set design and has been cited as an influence on the film noir style which was made popular by Alfred Hitchcock and other filmmakers of the 1940s. It is also said to be an allegory for German social attitudes in the period preceding World War II.

The presentation of the film was accompanied by a local band known as Dream of Fire*. Their well known circus like performances complimented the film to such an extent one could have imagined the group was created by Dr. Caligari himself. The hypnotic tunes surrounding the audience psyche kept them as spellbound as the film was known to do to its original viewers. Not only did the music match the tilted images presented on the screen with near perfection, but the images Dream of Fire* presented on stage often transcended those of the film. This was indeed a delight to experience for those members of the audience who are in deep admiration of the film.

A costume contest followed the film and musical performance with many competing for the grand prize. Tom Augusta* and someone dressed as a Banana shared the honor. Ok, I didn’t get his name or what the prize was. An ace reporter I’m not. However, if anyone knows this information, please feel free to make a comment so it can be shared with everyone who reads this article. You’ll receive my sincere appreciation for the selfless act.

The next film was first film adaptation of Robert Louis Stevenson's novella entitled, “The Strange Case of Dr Jekyll and Mr Hyde” which was shortened for the film to “Dr. Jekyll and Mr. Hyde.” The film was made in 1920 starring John Barrymore in both roles and directed by John S. Robertson. The classic story is about Dr. Jekyll who a good man who believes that everyone has a good and evil side to their nature. He then seeks to split the duality of human nature in order to enhance the good side by using a potion he concocted. However, when he drinks the potion, the good side doesn’t come out to play. But, his bad side does and names himself, “Mr. Hyde.” Anyone who are familiar with the tale can tell you this is not a good thing.

The film was shown with music provided by the band Dewey Decimal and The System*. Although their music was as rousing as ever, their songs did little to compliment what occurred on the screen. Yet, there was one aspect of their performance that might be interpreted in doing so. Two young women from the audience came upon the stage and soon became a focal point for many of the male members (no pun intended) of the audience. At times, they expressed the duality explored in the film as one woman presented herself as an innocent while the other was a baddie. What made it all the more intriguing is how they often took turns.

The evening ended as the band concluded its performance before the film had finished. The event proved to be a good night out and was very enjoyable. There are plans for The Pocono Community Theater* and PIBCO* to present their Silent Movies to Loud Music Series on a monthly basis and there was much anticipation among the audience in regards to experiencing another one in the future. However, some have shared a hope that the bands chosen for future events in the series may utilize them to enhance their creative skills as musicians to score the films as they’re being played. It has been suggested this improvisational approach would make the event an even more one.

The date of for The Pocono Community Theater* and PIBCO* next installment of their Silent Movies to Loud Music Series is yet to be determined. However, the next event at The Pocono Community Theater* will be The Forwardian Arts Society Film and Chat Gathering on Friday November 6th in which a film will be share by those attending the gathering and discussed afterwards in the Theater’s coffeehouse. A free beverage will be provided to the discussion participants. The film and its screening time is yet to be chosen but an invitation with complete information will be sent to those on The Forwardian Arts Society email list and those in it’s facebook’s Independent Film and Video group. Please feel free to contact me for more information on how to participate. You’ll find more photographs in The Forwardian Arts Society Music 2009 Gallery. www.myspace.com/forwardian_arts

The websites of those mentioned in the article are The Pocono Community Theater (PCT)* at www.poconocommunitytheater.org, The Pocono Internet Broadcasting Company (PIBCO)* at www.pibco1.com, Steve “Omni” Parker* of The Stroudsburg Social at www.stroudsocial.com, The Resonant* at www.myspace.com/theresonant, Dream of Fire* at www.myspace.com/dreamoffiremusic, Dewey Decimal and The System* at www.myspace.com/deweydecimalplaysmusic, and The Forwardian Arts Society at www.theforwardianartssociety.com.

(*) denotes members of The Forwardian Arts Society in good standing and are considered Our Good Friends.
Posted by Unknown at 8:19 PM