Blossoming At The OMN 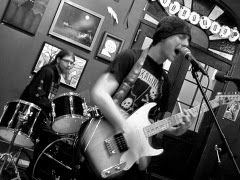 As the streets of Stroudsburg, PA were filled with the flowering bouquets of youth in all their adornments, The Sherman Theater’s Living Room held another installment of their weekly Open Mic Nite Series on Sunday May 4th. Conversations scented the venue with aromas of excitement as the time for those waiting to affix their names to the sign in sheet grew closer and closer. The moment arrived and identities were plucked from the pen so they could be planted upon the document and begin their germination toward a hopeful blossoming as the signatories’ talents took root in the evening’s encouraging garden.

The evening began as co host Jessie (aka JR) took the stage at the appointed hour to welcome those who were present and to share an adventure she had involving a favored poet of hers. Jeanann Verlee has published several books containing her words and JR had the good fortune of attending an event of which she was a featured reader. The two women met, hugged, and chatted with one another as if they had become friends years before they had done so that evening. It was at this time did JR read several selections written by Ms. Verlee to share the depth of her fandom with those around her.

The work spoke of the pain and irony of life with some of the imagery sprinkled with humor so those hearing it with their ears and seeing it with their mind’s eye could more easily embrace their truths without the thorns of the tragic depictions embodied in the work bringing the experiencer an inconsolable sorrow through the undiluted fullness of their hurt. It was when these words concluded was it time for the first of those performers who signed the list to share their talents with the gathering. Dee (aka Songbird) had not been seen in the venue for quite some time and her presence was greeted with delight by those who fondly remembered her previous sets.

Dee took the stage with her guitar and began singing several of the songs that endeared her to the gathering who frequented the event as well as the many newcomers who were touched by her newly experienced voice. It was during her performance did she suddenly take off her hat and threw it upon the floor with the claim it kept sliding off while she strummed her instrument. This act freed her from any remaining superficial restrictions allowing her to play with further abandonment pleasing the crowd greatly.

Dee was followed to the stage by co host AP Box www.facebook.com/APbboxes4u after being introduced by co host Andrew Oldfield with apologies for arriving late included in his words and a semi wrapped taco in his hands. AP began his time on stage with a series of vocal manipulations that delighted the audience along with a sound effect sketch involving a drive thru window. He later took some suggestions from the audience in order to improvise a routine. These suggestions led to a series of sounds evolving from the Star Trek to the Star Wars franchises. AP concluded his set and was greeted by a great deal of well deserved applause that echoed throughout the room.

AP was followed by Electric Guitarist Dave Pugh who shared a number of his original songs with the crowd with co host Andrew Oldfield accompanying him on drums. Dave was followed by a guitarist named Theo (aka Sunnyside Shading) whose return to the venue after quite a considerable absence delighted the crowd. Initially, Theo attempted to perform without the electronic assistance of a microphone but opted to do so when it was evident the sounds of the traffic upon the busy street would make it difficult, if not impossible, for the audience to enjoy the fullness of his talents. Which they did after the microphone was turned on and the joy embodied in his melodies and lyrics filled the room and the hearts who could now hear it all clearly.

Theo was followed to the stage by by Benjamin Ordonez who shared a number of poems that were familiar to the group. He was followed by the duet known as Woodrow www.facebook.com/wearewoodrow who consists of Theresa Ratliff on vocals and Brian Bramkamp on vocals and guitar. They began their set with a song titled, “Uncle John’s Band” which was originally performed by The Grateful Dead. They completed their set with a song from Jefferson Airplane titled, “White Rabbit.” It was at the conclusion of this psychedelic musical interlude was a break announced in order for those who partook of the evening’s delightful creative elixirs could explore their full effects through the conversations they would engage in.

As the break concluded, those who reentered The Living Room were met by Kes whose presence had not blessed the mic for quite some time. His arrival was a welcomed one as he and his guitar sung a number of songs that encouraged toe tapping and sing-alongs throughout his time on stage with co host Andrew Oldfield accompanying him on drums. He was followed by electric guitarist C Rock. It was during his introduction did the host share memories that both Kes and C Rock appeared in special Open Mic All Star Shows at the venue and an invitation was sent out to those who would like to share their talents in a similar event in the future. It was after these words did C Rock begin his performance.

Co host Andrew Oldfield remained on drums as C Rock touched the crowd with his magic. Chord changes echoed upon the buoyant walls of the boundless imagination as the melodious utterances of each note defined the ephemeral experiences that proved to be reflected glimpses of those more profoundly eternal. C Rock’s performance included two original compositions titled, “Sunny Days” and “Happy Days” which moved their dawns into the subconscious nocturnes of the listeners. It was after C Rock concluded his set did Co Host Jessie (aka JR) take the stage to share a poetic posting she received from a Facebook friend that entranced the crowd with its profound insights.

As the cadence of the Facebook words began to fade, Vinnie Huevos and his guitar took the stage. He was initially joined by co host Andrew Oldfield and later by co host AP. Together, their combined musicalities proceeded to kick ass much to the delight of every music loving derrière in the place. They were followed by a young woman simply known as “Day” who frequented the open mic nites many time before that evening but this was her first appearance on stage. In her time before the microphone, she shared her poetry that spoke beautifully of the pain we universally experience while living life as many times we feel like (as she profoundly put it) “the smallest clown in the biggest circus on earth.” Day was followed by Kevin Tails Moucha who shared poetry he read from a computer laptop held by co host AP whose words weaved in and out of one insightful mood after another to the pleasure of the group.

Kevin was followed by the mind bending musicalities of Wilbium who, in his pilot’s helmet, boarded the gathering upon his astral plane so they could take flight through the conscious clouds that hovered within their beings. The musical form known as “Techno” filled the senses as the expansions of the communal awareness grew within the dwelling of the mind in proportion and depth. As the vaporous sounds created by Wilbium and his electronic ensemble began to fade from this realm of existence and back to their hallucinatory origins, AP announced the main list of those who signed in to perform for the evening was exhausted. However, as there was more time allotted to the event, those who affixed their names upon the waiting list would now be invited to partake of the stage.

The first of these individuals to do so was Brad Bartholomew who noted his last name was that of a disciple of an individual known as, “Joshua, son of Joseph” (aka Jesus The Messiah or Christ) who lived the Roman province of  Judea and was executed by crucifixion after being found guilty for sedition c. 33 C. E. (Common Era). According to a biographical account attributed to a disciple known as “John,” Bartholomew was introduced to Joshua by another disciple named, “Phillip.” Brad read an exquisitely composed piece he wrote relating to the Judeo/Christian mythology relating to the beginning of the world and the source of what many in the faiths refer to as the original sin.

Brad was followed by Melissa Johnson whose voice captivated the audience with is clarion sounds. She was joined by co host AP who lent his vocals and auditory percussions to enhance the songs she performed. They were followed Jesse Morales whose absence from the Living Room was sorely felt. However, the return of him and his guitar touched the spark of joy that was eager to be kindled within the heart as those who listened to his musical offerings embraced them with their souls.

As the final notes of the final songs Jesse performed faded into the interiors of the venue’s walls and the audience’s hearts, it was announced the end of another evening for the Open Mic Night Series had come. It was then those who had remained throughout the night shared their farewells and eagerly made plans to return to the venue to enjoy another night of creative offerings from their comrades. You’ll be able to find more photographs taken during the Sunday May 4th Open Mic Nite Session in The Living Room 2014 Gallery Part 3 at www.facebook.com/media/set/?set=a.10152343904050421.1073741890.636000420&type=1.

The next installment of the Living Room Open Mic Nite Series will take place on Sunday May 11th beginning at 7pm with sign ins beginning at 6:30pm. Musicians, poets, writers, and anyone who would like to share something with a receptive audience are welcomed to do so. You can learn more about The Living Room Open Mic Nite Series and the All Star show by Exploring their Facebook Page at www.facebook.com/OpenMicAtTheLivingRoom.

In addition to the Open Mic Nites presented at The Living Room, the venue also holds a Gallery which presents the work of visual artists from around the area. Their current exhibition is titled, “Art-ology” and features the work of artists from around the area. Their next exhibit will take place in June with artists whose names are yet to be announced. Please contact the gallery’s Director and Curators, Keyaira and Drew Ozkenel, at 570-421-2808 for more information.

The Living Room is located on Main Street in Stroudsburg, PA next to The Sherman Theater who owns the building. The Living Room is a non-profit artspace and community hub featuring live music, performance, and other events in an intimate setting at affordable prices. Please Explore The Living Room Facebook Page at www.facebook.com/pages/The-Living-Room/123978921059378 for more information on The Living Room, all they have to offer, and how to be a part of it all.
Posted by Unknown at 2:31 PM