Jazzing it Up Smoothly 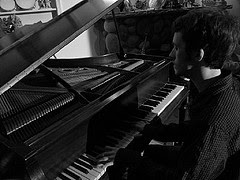 The ArtMusic Coffeehouse in East Stroudsburg, PA presented a very smooth evening of music on Thursday May 19th which was performed by Jazz Pianist Davy Lantz IV. As with all concerts held at The ArtMusic Coffeehouse, a meditative musical interlude was performed by Don Slepian who was the evening’s host. His improvised movements provided a relaxed focus for each member of the audience could affix their concentration upon. This allowed them to prepare for the remainder of the evening’s music with a refreshed perspective as the thoughts and concerns of the day melted from their consciousness. It was while the audience was exploring their transcendental awareness did a young man approach the house piano to begin his mesmerizing performance.

Davy Lantz IV is well known in the local jazz community and is considered a rising star in the genre. This consideration is well deserved as demonstrated by the original compositions and the stylings of established work he performed during the concert. A soft silence touched those who attended the concert as each attendee could be seen closing their eyes as they contemplated each note that traveled their way from within. This was enhanced by the conversation engaged in during the concert between the pianist and his audience which inspired many to take up instruments made available by the concert’s hosts to add their inner song to their experience.

David Lantz IV is presently studying jazz piano at the Juilliard School of Music in NYC, NY. His past performances include being a part of a jazz trio which performed at the Governor's Awards for the Arts in Williamsport, PA. Davy was also a member of COTA Cats during his high school years which is an educational arm The Delaware Water Gap Celebration of the Arts (COTA) Annual Jazz and Arts Festival which takes place every year. The COTA Cats program is designed to seek out students who have an outstanding musical talent for the art of Jazz and to develop that talent through group and individual mentorships throughout the year leading up to a orchestral performance during the festival itself. You’ll find more Photographs taken during the concert in The ArtMusic Coffeehouse 2011 Gallery at www.facebook.com/forwardian.dude.

The ArtMusic Coffeehouse is held in the home of Don Slepian and Jan Julia who reside in the borough of East Stroudsburg, PA as part of the Concerts In Your Home Series. A variety of musical forms are presented including folk, jazz, classical, and electronic music. Although the concerts welcomes all who wish to attend, seating is limited as it they take place in a private home. The Next The ArtMusic Coffeehouse Concert will feature Sundad on Friday May 27th, Craig Bickhart on Saturday June 11th, and Robb Taylor on Saturday June 25th. They begin at 8pm. Please Explore The ArtMusic Coffeehouse Website at www.ArtMusicCoffeehouse.com or Call 570-476-6307 for more information and to reserve your seat.
Posted by Unknown at 2:30 PM