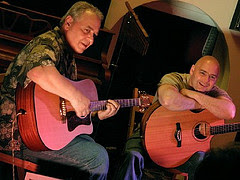 A house filled with music lovers eagerly awaited the mesmerically enchanting guitaric sounds the father and son duo known as “Sundad” has become known for. Their performance was presented Friday May 27th in the ArtMusic Coffeehouse which is the Jan Julia and Don Slepian home located in East Stroudsburg, PA as part of the Concerts In Your Home Series. The warm sensations of a Summer that has finally arrived for the North East PA region was met with those created by the host and continued their good will though the conversation shared by the many who attended the concert.

As with all ArtMusic Coffeehouse concerts, the evening began with some meditative renderings created improvisationally by Don Slepian on his keyboard. This never fails to prepare an audience member as it encourages the individual to leave the outside world that demands his/her attention outside while he/she enters a dreamlike state allowing them to explore and embrace all the possibilities one can encounter in the realm of nothingness. It was after this preparation when John Eurell Sr. and John Eurell Jr. take the stage.

The air filled with rhythms, harmonies, and chords as the duo began strumming our souls with their fingers and playing our dreams with their songs. They softly brought a life into awareness in which many have forgotten existed. Each note echoed a memory within. The audience’s anticipation of what they were to encountered upon hearing a live performance given by Sundad satisfied their expectations as memories gave way to an ever deepening experience through the music which would become a welcomed recollection in a future time when such a reminder is needed. You’ll find more photographs taken during the concert in The ArtMusic Coffeehouse 2011 Gallery at www.facebook.com/forwardian.dude.

John Eurell Sr. began playing guitar over 40 years within many musical genres which includes rock and roll, hard rock, blues, funk, disco, and jazz and his experience in these forms have greatly influenced his original compositions. During his many performances, John Eurell Jr. was brought along at a very early age which resulted in becoming a self taught guitarist and followed in his father’s footsteps by immersing himself in the many musical genres that formed their bond. Together, they formed Sundad and has been heard on the syndicated "Echoes" radio show with host John Diliberto aired on National Public Radio and Sirius/XM satellite radio. Please Explore The Sundad Website at www.sundad.com for more information.

The ArtMusic Coffeehouse is held in the home of Don Slepian and Jan Julia who reside in the borough of East Stroudsburg, PA as part of the Concerts In Your Home Series. A variety of musical forms are presented including folk, jazz, classical, and electronic music. Although the concerts welcomes all who wish to attend, seating is limited as it they take place in a private home. The Next The ArtMusic Coffeehouse Concert will feature Craig Bickhart on Saturday June 11th and Robb Taylor on Saturday June 25th. They begin at 8pm. Please Explore The ArtMusic Coffeehouse Website at www.ArtMusicCoffeehouse.com or Call 570-476-630 for more information and to reserve your seats.
Posted by Unknown at 4:18 PM