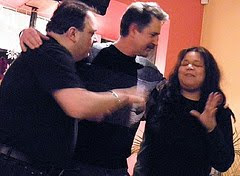 The Cheeky Monkey Coffeehouse in Stroudsburg, PA hosted a Comedy Night on Friday January 14th presented by The Off Track Players. The comedy troupe featured local comedians Joseph Carnevale, Kevin Cronk, Penny Dee, Anthony DiSanto, Matt Duffin, and Tiffani Thompson who showcased their talents in a variety of sketches, monologues, and improvisational games which amused their audience. Audience members were invited to participate in this game which enhanced the delight of experiencing the show.

These games included one called, “ABC” in which a location was selected by the audience and each performer had to begin their sentence in alphabetical order in relation to where they were. Another game consisted of members of the troupe being placed in another location and going through the scene while it change4d from one genre to another. The scene for this game was set in a laundry mat with genres that included science fiction and martial arts films. It was quite amusing.

It was a fun night out and a great opportunity to hear some original work by local comics. The next Comedy Night at The Cheeky Monkey featuring The Off Track Players is scheduled for Friday February 11th beginning at 7pm. You’ll find more photographs taken during the January 14th event in The Cheeky Monkey 2011 Gallery at www.facebook.com/forwardian.dude.

The Off-Track Comedy Players offer a plethora of comedic and non-comedic services (including live-action murder mystery shows) and are available for resorts, clubs as well as private or public events. They’ll also be appearing at The Daniels Family Resort in Canadensis, PA sometime in the near future in addition to their next show at The Cheeky Monkey. Please Explore The Off-Track Comedy Players Website at www.offtrackcomedy.com or Call 570-486-6787 for more information.