Music for Children at ESU 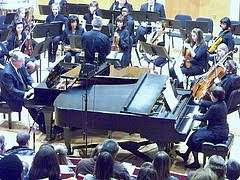 The East Stroudsburg University (ESU) of PA Department of Music presented a Children Concert on Wednesday December 1st in The Cecilia S. Cohen Recital Hall located in The Fine and Performing Arts Building on the ESU Campus. The program featured the University/Community Orchestra under the direction of Betsy Buzzelli-Clark who also performed as one of the program’s pianist along with Robert Miller. Otis French Conducted the Orchestra while Terry Flatt accompanied the music by serving as the stories’ Narrator.

The program included “The Carnival of the Animals” composed by Camille Saint-Saens (1835-1921) and “Peter and the Wolf” composed by Serge Prokofieff (1891-1953). I couldn’t stay for the whole performance, but what I experienced was enjoyable as was also evident in the smiles on the faces of numerous children in the audience. You’ll find more photographs in The Forwardian Arts Society Music 2010 Gallery at www.myspace.com/forwardian_arts.