Fiery Dreams Takes The Holidays at The Jukebox 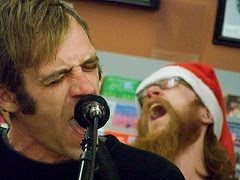 The Main St. Jukebox in Stroudsburg, PA held their annual holiday celebration with “A Very Dream of Fire Christmas” on Friday December 17th. The festive event featured the band Dream of Fire along with numerous musical guest which made it a memorable evening. The conversation among the many who attended, the cookies, and the Pennsylvania Dutch Eggnog which was almost as kick ass as the music collaborated in bringing the spirit of joy and camaraderie the season is known for when it’s at its best.

The musical guests were introduced by Dream of Fire’s drummer Charlie Abriel who also accompanied the first band to perform which was The Eric J. Becker Experimental Experience Project Tour/Business Edition. Eric performed his original works on guitar along with Keith 'Kif' Haynes on Bass Guitar and Abby Braman of Dream of Fire on Banjo and Harmonica. Trombonist Joe Lynch of Dream of Fire joined the band for a song or two. The quality inherent in original songs composed by Eric along with his rendition of the Elvis Presley song “Blue Christmas” provided a foretaste of what was to come.

The foretaste provided by the Eric J. Becker Experimental Experience Project Tour/Business Edition led to a satisfying portion served by Blues Guitarist Randy Bigness who was joined by his daughter Kristin. They performed a series of Christmas favorites inviting the audience to join in. The good cheer of Randy and Kristin inspired a chorus of smiling faces to accept the invitation and their collective voices soon (as one fan put it) brought the house down.

Randy and Kristin Bigness’ performances was followed by Guitarist Johnny Rydell whose powerful voice echoed throughout the Jukebox and entered the soul of all who experienced it. He was followed by a solo performance of Keith 'Kif' Haynes of the Eric J. Becker Experimental Experience Project Tour/Business Edition which brought more enjoyment to the evening. But, this enjoyment didn’t end with his performance. It continued with that of Guitarist Ajax Rasputin who kicked some holiday butt and a high tech karaoke Duet given by Eric J. Becker and Kristy Galunic of Dream of Fire. The Duet utilized their Cell Phone devices to obtain music and lyrics to the song “Baby, It’s Cold Outside,” held them to the microphone, and sang. Damn, they were good.

After a brief break, Dream of Fire took the Microphones. Those members of the band who already performed were joined by Lead Guitarist and Vocalist Jimmy Lee and Will McGrath on bass. There are many reasons why Dream of Fire has gained the reputation for being one of the best bands in the area and making it a favorite among many music lovers. Although none in attendance had forgotten those reasons, they were reminded of them nonetheless. This was especially true given the high quality standard of music presented prior to their performance.

To say a performance was great may suffice for any other band, but such an accolade doesn’t quite do justice for Dream of Fire. The songs are well structured, the vocal and musical interpretation is spot on, and their professionalism is par excellence. But, as good as these qualities are, people come to see this band not solely because of the music but to experience how the band performed it. In other words, they not only sing a song, they perform it. It’s not an easy distinction to make in the written word, but those who came out to The Main Street Jukebox found it a very easy one to make. You’ll find more photographs taken during the show in The Forwardian Arts Society Main St. Jukebox 2010 Gallery at www.myspace.com/forwardian_arts.

In addition to Art Exhibitions, Concerts, and special shows, The Main Street Jukebox offers recordings made on CDs, Tapes, and Vinyl. Please Explore The Main St. Jukebox Website at www.myspace.com/mainstjukebox or call 570-424-2246 for more information about these events and all they have to offer.
Posted by Unknown at 8:47 PM