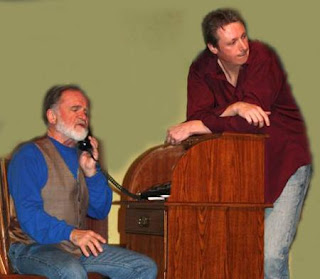 The Shawnee Playhouse in Shawnee on the Delaware, PA presented The Center Stage Players‘ production of “Dr. Cook‘s Garden” by Ira Lavin who is best know for his work which includes Rosemary's Baby, The Boys from Brazil, The Stepford Wives, and Deathtrap. The air of mystery found in most of these pieces can be found to some greater extent in “Dr. Cook’s Garden.” It is a suspenseful tale of a young Jim Tennyson (as portrayed by Patrick Turner who also serves on The Center Stage Players’ Board of Directors) retuning to his home town for a visit after becoming a Doctor only to discover the doctor who has been not only his mentor but a father to him, has been killing a number of his patients whom he has determined to be not fit to live.

These determining factors Dr. Leonard Cook (as portrayed by Jack Butler who also designed the set) includes their abusive behaviors, their standing with the law, their moral attributes, and their ability to become a meaningful part of the community which includes those who are born mentally handicapped. The play not only examines the legal ramifications of Dr. Cook’s actions but the morality of his justifications as well. This is done through a series of dialogues between the two doctors which to this reviewer reminded him of the dialogues of Socrates recorded by Plato.

However, this dialogue seems to conclude when Dr. Cook agrees to cease his deadly practice and allows the young Dr. Tennyson to monitor his future activities to make sure he does. As I’ve said, it seems to conclude in this manner but any avid reader of mystery fiction knows better. Dr. Cook develops a plan to kill his young protégé so he can continue weeding his community of the hazards threatening its healthy growth.

He does so but in his misplaced sense of right and wrong Dr. Cook allows his victim an opportunity to live by sharing with him a secret which he can use if he ever was to reveal his actions to the proper authorities. The young doctor reveals a secret and is given the antidote assuring his survival. However, when the young doctor reveals the secret was a fabrication, the elder doctor becomes enraged screaming, “Thou Shalt not Lie. Thou Shalt not Lie.” and begins physically attacking the still weaken youth until he succumbs to a heart attack and dies. And, like Socrates, he dies of a self inflicted poison. Not of Hemlock, but of his own sense of moral certainty which has caused him to perform some immoral acts.

The remainder of the cast consisted of Nance Brown as Bea Schmidt, Ed Erm as Elias Hart, and Sue Butler as Dora Ludlow and also served the production as its director and set designer while serving as The Center Stage Players’ President. As with many productions presented by The Center Stage Players, it is a pleasure to sit in the audience to watch the actors act. There is a love for the craft that shines through their performances not seen often enough in other theatrical troupes. Their love is not Hamish as the characters they play always come before their portrayal of them, but it is a good honest love that enhances the play itself. This is appreciated by the audience and by this reviewer as well.

The Executive Director of The Shawnee Playhouse is Midge McClosky while the producers are Ginny and Charlie Kirkwood. The Sales Manager is Mary Horn while members of the Box Office Staff are Becky Haskell and Chrissy McManus. The Playhouse’s costumer is Missy Benefield. The Shawnee Playhouse publicity is handled by Amy Cramer while David Schrage is its Webmaster.

This presentation of The Center Stage Players’ production of “Dr. Cook‘s Garden” by Ira Lavin will conclude its run at The Shawnee Playhouse in Shawnee on the Delaware, PA on Sunday May 9th and this reviewer was unable to make his recommendation of this play until now. However, there is one more day in which you can see it and this reviewer suggest you make some tracks and do so. It is well worth watching for both the suspense it builds and the superb acting it presents. The next Shawnee Playhouse in Shawnee on the Delaware, PA presentations will include The Pocono Skies Electro Music Festival May 15th and 16th and “Manhattan Casanova” May 21st - 30th. Please contact The Shawnee Playhouse at 570-421-5093 or Explore their Website at www.theshawneeplayhouse.com for more information and to reserve your ticket. Please feel free to Explore The Center Stage Players’ Website at www.centerstageplayers.org to learn more information about them.

Those who enjoy the Passionate Art Lover level of membership in The Forwardian Arts Society are offered a $3.00 discount off the admission fee of selected The Shawnee Playhouse Productions.

Photograph provided by The Shawnee Playhouse.
Posted by Unknown at 7:48 PM