Slamming for the Community 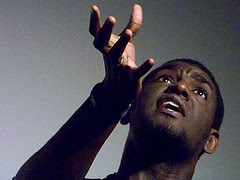 The festival began with music provided by Cool DJ Adverb with a statement of purpose given by Urban Mountain Voices (UMV). Soon after the statement was concluded, a spoken word performance was given by Fafi aka 3 percent who is a theater professor from Zimbabwe teaching at ESU. His African rhythms flowed through the audience and became more powerful as he caught them upon their return only to throw them out again with the new insurged energies electrifying all who touched the words. This performance was followed by an equally powerful one given by PYPM Poets Anwar Jabari and Kavi Marque who slapped the audience into further wakefulness to the rhythm and meaning embedded in the experiences they revealed through their words.

As the audience caught their breath, Tricia McGavin-Fernandez of UMV took the mic to share some welcoming comments along with letting everyone know more about the group and all the work they do to benefit those they serve. She followed this with introductions of Mike Cirelli of U-W and “Just Greg” Corbin of PYPM who co-hosted the Mock Poetry Slam titled, “This is Slam” in which participating Poets an opportunity to “spit” their words into a panel of judges who sought to determine which poem touched their sensory attributes connecting the body, mind, and spirit into one entity inspired by the images and feelings shaped by the poets they hear the most. This was no easy task for the judges to perform as each poet created a world with a compulsion to be explored regardless of the fear of what might be found within oneself.

Many of the poems dealt with subject matters too many young people find themselves in. They are of abuse, rejection, pain, and other inhuman conditions inhabiting their world. For me, I felt a sadness hearing such experiences related as no one at any age should be aware of such things. Yet, I also felt a gladness these early teens were able to share their stories through their work as it gave hope their life decisions will be better ones than their parents and the cycles they find themselves won’t be visited upon their children. It also gave hope the inner most healing that is needed to occur will occur since, after all, we are all only as sick as our secrets.

There were no declared winners by the judges as it was a “Mock” competition. But, none lost including the audience who were touched by their words so freely expressed without any external restrictions. And, this is how all forms of poetry should be as it allows both the poets and the listeners to become a part of the work and continue the words in their lives.

The Mock Slam was followed by a Spoken Word Theatrical performance titled, “Daddy Dress Up” given by its author Thiahera Nurse. The combination of the poetic form with theatrical techniques complimented each other as Ms. Nurse moved not only her words but the emotions of all who heard them. This was done through the exploration of many characters who each contained individualistic points of view. One in particularly compelling was her portrayal of a boy who winds up beating his girlfriend due to his sexual frustration. This graphic depiction brought a reality to the piece few other theatrical presentations can and this made the entire performance even more impressive.

This was followed by the featured guest Rachel McKibbens who read from her book titled, “Pink Elephant.” Her words mixed pain and laughter in a bowl full of ingredients designed to make everything come out raw. In this rawness, we are able to see ourselves unencumbered by the falsities we delude our lives with as we endeavor to become pleasing denizens of the world around us. We refuse to see the pink elephants in the rooms of our subconscious until we are shown such mirrors Ms. McKibbons place before us. This is something all forms of poetry does but it seems Slam Poetry does so more effectively than most. I don’t know why this seems to be so. But, it does.

The festival ended with some appreciative closing remarks given by Ms. McGarvin-Fernandez and with many of the poets coming on stage to share some improvisational poetry with one another. This joyous celebration proved to be a wonderful finale as it brought the audience further into the creative world of the poets. Everyone left the theater eagerly awaiting Slamfest 2011. Those who supported the festival included Merchants such as “People Like Me” along with artists Rachel Burke who conceptualized the Poster Art and David Ayllon who provided the illustration. You’ll find more photographs in The Forwardian Arts Society Pocono Community Theater 2010 Gallery at www.myspace.com/forwardian_arts.

The Philadelphia Youth Poetry Movement (PYPM) in based in Philadelphia, PA which was founded by “Just Greg” Corbin and consist of Anwar Jabqari, Mayra Williams, and Kavi Marque. The group is part of a New Beginnings Program to help young people find their voice through the poetic form while promoting social change and enhancing positive self-esteem. They have performed at the White House for President Obama and his family.

Urban Mountain Voices (UMV) is based in The Monroe County, PA area (aka the Poconos) and consists of Nessa Bell, Ryan Bernard, Blair Thomas, Malcolm Tinglin, Blake Quinn, Carl Watts, and KJ Wilson. The group provides young people an opportunity to express themselves in an open and honest manner through the medium. The group meets every Friday beginning at 4:30pm on the East Stroudsburg University (ESU) of PA Campus and welcomes young people between the ages of 13-20 regardless of their race, gender, sexual orientation, religious affiliation, or academic standing.

Contact information of those mentioned in this article include The Pocono Community Theater at www.poconocommunitytheater.org, Rachel McKibbens at www.rachelmckibbens.com, Urban Word NYC (UW) at www.urbanwordnyc.org, The Philadelphia Youth Poetry Movement (PYPM) at www.phillyyouthpoet.org, and Urban Mountain Voices at www.urbanmountainvoices.org, Cool DJ Adverb at CoolDJAdverb@gmail.com, Brave New Voices at www.hbo.com, People Like Me at www.PeopleLikeMeshop.com, and The Forwardian Arts Society at www.TheForwardianArtsSociety.com
Posted by Unknown at 7:55 PM