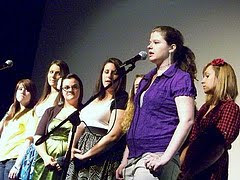 The Pocono Community Theater in East Stroudsburg, PA Hosted The Youth Infusion, Inc presentation of a Documentary film titled, “BeNoBull” on Thursday May 20th. The evening included some Public Service Announcements (PSAs) dealing with Animal Abuse and Environmental Issues Students from The East Stroudsburg High School-South (ESHS-S) created along with some Spoken Word Performances by the local youth poets of Urban Mountain Voices (UMV). There were also works of art relating to the Bullying Issue created by the school’s Art Club mentored by Michael Jones.

A Spoken Word (aka Poetry) performance was given by Urban Mountain Voices (UMV) who was introduced by it‘s founder Tricia McGarvin-Fernandez. As usual, their participation enhanced the topic of any event they’re a part of by providing it relevancy and a sense of urgency. Their deep and soulful truths goes beyond the scholastic perceptions of the issue and brings them to the reality those who are victimized face every single day. One never fails to be touched by their words and hearing them from poets Blake, Bekah, and a duo performance by Carl and Nessa was no exception although their presentations were exceptional.

The performance was followed by some reflective remarks given by the Students who made the Documentary titled, “BeNoBull.” They included Michael Colao, Patrick Monahan, Ashlee DeJesus, Skylar Ogden, Evan Willey, Shanna O’Connor, Marianne Novak, KJ Wilson, Shayna Smith, Sara Tait, Jamey Dumeus, and Jordan Rodriguez. A screening of the film followed which dealt with all types of what can now be classified as “Bullying.” Sexual, GLBT (Gay, Lesbian, Bi-Sexual, Transgender), Physical, Verbal, Racial, and Cyber Bullying. The film was made with the help of Pocono Community Access Television (PCA TV).

The approach of the Documentary Film to the topic was to explore it in a straight forward question and answer format. This involves interviewing someone with some knowledge and/or experience with the topic and putting the conversation on film. This is a good format for High School Students to learn about the art of documentary filmmaking, but it has its limitations. The primary one being is dependence on the answers one receives and the way (or lack of one) the subject enhances the audience interest in the topic so they would want to learn more about it. A more interesting approach would be to follow someone who is presently being bullied so the audience can experience it first hand.

This perspective came from one member of the panel and was quickly reproached by many of the students and other panel members (although their reproach was much more subtle) as it dealt with privacy issues among the students. Although many of the panel agreed parents should be able to see if there are instances of “Cyber Bulling” effecting their child by seeing the content firsthand, many agreed there should be a relationship of trust established between both parent and child beforehand. After all, (and this is from my personal perspective) some parents would use the information they find to abuse and manipulate their children if complete access to their internet conversations were gained. In other words, their children’s private thoughts and conversations would be used against them in very unhealthy ways.

Now, for some personal perspectives I have on the topic. Throughout my years in Elementary and Secondary (High) School years, I’ve been bullied a great deal. I was very over weight and became the bunt of jokes and ridicule along with being physically harassed by my class mates. This was a trying time for me as everyday was like a Hell on Earth. I dreaded going to school and I never have a time when I look back on those years with the fore longing I’ve heard many enjoy. I didn’t like being a kid and I have no fond memories of it.

However, although I’m glad schools have adopted “No Bullying” policies and have taken a more proactive approach in order to protect their students, I’m left wondering what this all really means. It seem this is some sort of scholastic trend created to generate good feelings for the educational system among the tax paying parents who send their children to school.

There has always been bullying ever since the first schools were built and it’s most likely there always will be whenever we place a variety of children together. Actually, bullying doesn’t’ even require a variety of children as siblings often engage in the activity as well. Now, bullying has evolved to encompass every social inconvenient there is ranging from the very serious forms of sexual harassment and physical abuse to taunts from insensitive peers who learned such attitudes from their parents. And, here is where a larger issue such a trendy approach makes the issue lacking.

“Bullying” doesn’t come from a vacuum. It is often taught from the home as parents continue the generational prejudices, attitudes, and violent methods of the past as their familiar mindsets confronts the real world with its modern and enlightened perspectives. This condition is prevalent in our society and cannot be effectively dealt with through a few after school programs or films made in a controlled scholastic environment void of controversial material so they will be found acceptable to a school board and parents.

“Bullying” never became an important issue in the school systems until The Columbine High School massacre which occurred on Tuesday April 20th, 1999. Two High School Seniors named Eric Harris and Dylan Klebold spent the day killing 12 students and one teacher along with injuring 21 other students directly and three people were injured while attempting to escape before committing suicide. It was shown the two were bullied leading them to severe mental anguish which they chose to alleviate by killing their tormentors and all who stood by to watch. Anti-Bullying programs were later put into place not to protect students from being bullied but to protect students, faculty, and staff from those seeking revenge. In other words, the bullies and their accessories ran for codified cover.

This by no means suggests this trend in curbing “bullying” is a sham. But, until it is explored more in depth than it presently is, it will always continue to destroy children even unto their adult years. We must look deeply into our society and how it accepts violent solutions such as war and WWF Matches to many of its problems. In doing so, we must look into ourselves and that is a very scary prospect for most of us. And, while films like those made by the Students of East Stroudsburg High School-South was a small step in this direction, it was a step nevertheless.

Youth Infusion is an organization created and run by young people which works to support youth as decision-makers, advocates, and community change-agents. We do this by helping the organizations and institutions that make decisions for youth start making decisions with youth. We know this is hard work. That is why we focus on the 'how-to' of youth-adult partnerships. We build collaborative structures, develop transparent processes, and promote inclusive cultures in both non-profit organizations and government agencies. Together, we will envision, plan, build, and secure communities in which we can all actively grow and thrive.

Urban Mountain Voices (UMV) is based in The Monroe County, PA area (aka the Poconos) and consists of Nessa Bell, Ryan Bernard, Blair Thomas, Malcolm Tinglin, Blake Quinn, Carl Watts, and KJ Wilson. The group provides young people an opportunity to express themselves in an open and honest manner through the medium. The group meets every Friday beginning at 4:30pm on the East Stroudsburg University (ESU) of PA Campus and welcomes young people between the ages of 13-20 regardless of their race, gender, sexual orientation, religious affiliation, or academic standing.